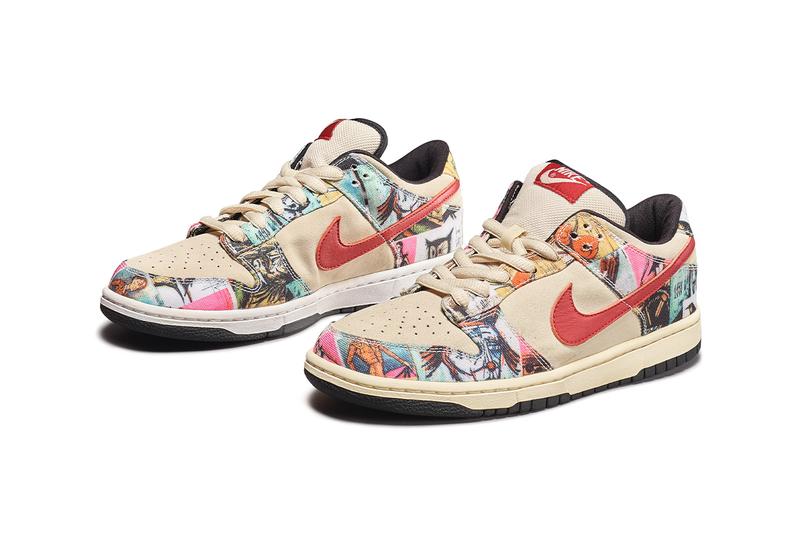 A sale of 8 of the most exclusive limited editions artesian sneakers in sneaker history has just been showcased on Sotheby’s in a capsule labeled ‘Cult Canvas’.

All made by the sneaker moguls Nike, each sneaker pays tribute to the cross-section among art and fashion, illustration and design, and sport and tradition. Up for auction for a 7 day period only, the auction consists of one-off super limited-edition pairs and production samples, all of which were produced in alliance with artists.

From French Expressionist Bernard Buffet to New York street artist Futura 2000 and Michael Lau, the founder of designer toy figures, each and every item on offer is a sneaker beloved to the collectors globally.

Stand-apart kicks consist of the ‘NYC Pigeon’ Nike Dunk Low Pro SB that fetches a hefty sum between $25,000-30,000 USD, and one pair of Nike Dunk High Pro SB ‘FLOM’ kicks out of only 24 ever made. Launched in 2005, the sneaker is deemed one of the most exclusive Nike SB sneakers after only three pairs were raffled to the general public, while the remaining 21 were gifted to friends or family members.

From ‘Dunk Highs’ to ‘Dunk Lows’, a production sample of the much-admired ‘Paris’ Nike Dunk Low Pro SB is also a part of the astronomical line-up and is estimated to bag between $70,000-80,000 USD, while a sample pair of Nike Dunk SB Low by Japanese illustrator Katsuya Terada is just one of 12 in ever to be produced.

‘Cult Canvas’ is now live on Sotheby’s website with bidding continuing until September 30.

To know about the Reebok Legion of Fury collection click here.

The Nike Air Force 1 High Gets A Solid Green Sole