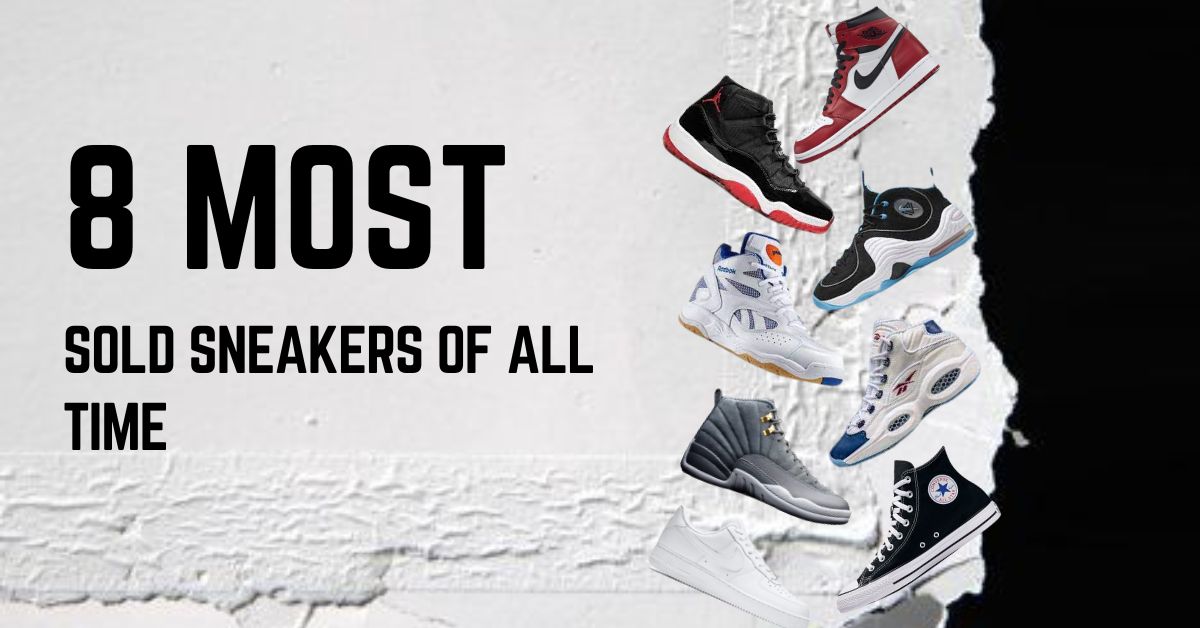 Sneakers have been a staple of modern fashion for several years now. It is safe to say that sneakers are the coolest style of footwear currently. You can wear it anytime any occasion. Although; the game has evolved astronomically since the trend entered mainstream, some styles remain classics. All of us must have at least one pair of the latest and trendy or evergreen and comfortable sneakers in our closets.

Here we will see the best top 8 most sold sneakers of all time.

The first Air Jordan was produced for Michael Jordan during his time with the Chicago Bulls in 1984 and designed by Peter B. Moore. Along with iconic release of colourways including Air Jordan 1 Royal. Moreover, Air Jordan Metallic, Air Jordan Black Toe and more. Whereas all were failed, only the Air Jordan 1 Chicago, which manages to stand above out.

Additionally in 1994, Chicago Air Jordan came up with retro rendition, having Nike Air tag on tongue. Meanwhile 2 decades without any change this was considered best retro. The year 2013, Air Jordan 1 again released with Nike Air branding and lasted for 2 years.

Finally in 2015, there was a true Chicago 1 fashion having Nike Air labelling on tongue and no jump man silhouette. Once again, they are re-imagining Chicago Jordan 1 on 29 October 2022. The red and black colourway of the Nike Air Ship, the prototype for the Jordan I, was later outlawed by then-NBA Commissioner David Stern for having very little white on them.

Converse started making an early basketball shoe in 1917 and redesigned it in 1922, when Chuck Taylor asked the company to create a better shoe with more support and flexibility. After Converse added Taylor’s signature to the ankle patch, they became known as Chuck Taylor All Stars. By the 1960s the company had captured about 70 to 80 percent of the basketball shoe market, but the shoe declined in popularity during the 1970s, when more and more basketball players wore other brands of shoes. Chuck Taylor All Stars enjoyed a comeback in popularity in the 1980s as retro-style casual footwear.

A hi-top and a low-top range were planned, with initial colour offerings in white, silver, royal blue, red, green, black, pink, and blue.

The Air Force 1 (or AF1 or AF-1) was never originally called the Air Force. Bruce Kilgore designed the shoe. The name is a reference to Air Force One, the plane that carries the President of the United States. Nike Air Force 1s were originally considered the favoured shoe of inner-city youth, especially in Harlem, New York; hence the nickname “Uptowns”.

The Air Force 1 was produced in 1982 and discontinued in 1984. It was re-released in 1986 with the modern italic Nike logo with a Swoosh on the bottom on the back of the shoe. Little has changed to the Air Force One since its creation in 1982, although the original stitching on the side panels is no longer present in modern versions of the shoe. Since then, over 1,700 colour variations have been produced, bringing in an estimated 800 million USD/year in revenue.

This model was designed by Tinker Hatfield. When the shoe launched, Michael Jordan (retired from basketball by then) was with the Birmingham Barons in baseball’s minor baseball leagues. Hatfield designed the sneaker waiting for Jordan to come back and hoping he would play in them.

The ballistic mesh upper of the sneaker was meant to make the Air Jordan XI 19 lighter and more durable than past sneakers. Further changes came with the use of a carbon fiber spring plate in the translucent “frosty” outsole, giving the shoe better torque when twisting on the court. The highlight and arguably best-known aspect of the shoe is its patent leather mudguard. Patent leather was lightweight compared to genuine leather and also tended not to stretch as much – a property to help keep the foot within the bounds of the foot bed during directional changes on the court

In 1988, Design Continuum, an industrial design firm, partnered with Reebok to design a shoe that used inflatable chambers that pump-up for a custom fit, the Reebok Pump. A demo version of the Pump, a customizable inflatable/deflatable high-top shoe, was exhibited at the Sporting Goods Manufacturers’ Association in February 1989. On 24 November 1989, the first Reebok Pump was released. That month, Dominique Wilkins was featured on a television commercial introducing the Reebok Pump.

In February 1991, Dee Brown inflated his Reebok Pumps in front of a national audience before scoring a title-winning dunk during the 1991 NBA Slam Dunk Contest. That year, Pump expanded into cross-training, off-road, golf, walking, aerobics and running shoes. Full foot, midfoot, collar, arch, footbed and Dual Chamber support was offered at the time. The pump technology was patented in May 1992.

The Air Jordan 12 is the twelfth Air Jordan signature shoe designed for Chicago Bulls legend Michael Jordan. It debuted in 1996 and released throughout the 1996-1997 NBA season. The sneakers originally retailed for $135 and was designed by Tinker Hatfield. Throughout the shoe’s run, five colour ways were released – white/black aka “Taxi”, a white/red, “Obsidian”, a black/red “Flu Game” (more on this later), and a black/white “Playoffs”. The Air Jordan 12 was the first Air Jordan sneaker with Zoom Air cushioning. A full-length cushion was encased in Phylon and placed above a carbon fiber mid foot shank. The sneaker mostly built with premium full-grain leather, a detail that ended up being somewhat of a disadvantage due to its lack of breathability.

The Reebok Question is Allen Iverson’s first-ever Reebok signature sneaker. Released in 1996 and designed by Scott Hewett, the Question is known for its colourful toe cap, ghillie lacing system, translucent outsole, and DMX cushioning. As Iverson’s most recognizable piece of signature footwear, the Question is a certified classic.

Reebok Question to mimic elements from the Jordan 11 worn by Iverson in his college playing days.

Social Status is not only ushering in the current wave of Air Max Penny retro models, but they’re also running point for the sequel – the Air Penny 2. Heralded as high as the original model, the Air Penny 2 featured one of wildest designs of the mid-late 1990s, but that was the norm for Penny Hardaway as he was often used as a platform for Nike to boast Eric Avar’s most daring designs. It was a flawless continuation of that introductory model, eluding the sophomore slump thanks to the continued on with the help of Lil’ Penny. In fact, the Air Penny 2 was one of the most popular models of that ’96-’97 seasons as it marked a significant moment in Penny’s career – the post-Shaq era. Orlando was Penny’s show for good, and the future for the point guard was bright and magical.

The Nike Air Trainer 3 “Viotech” From 2002 Makes A Return