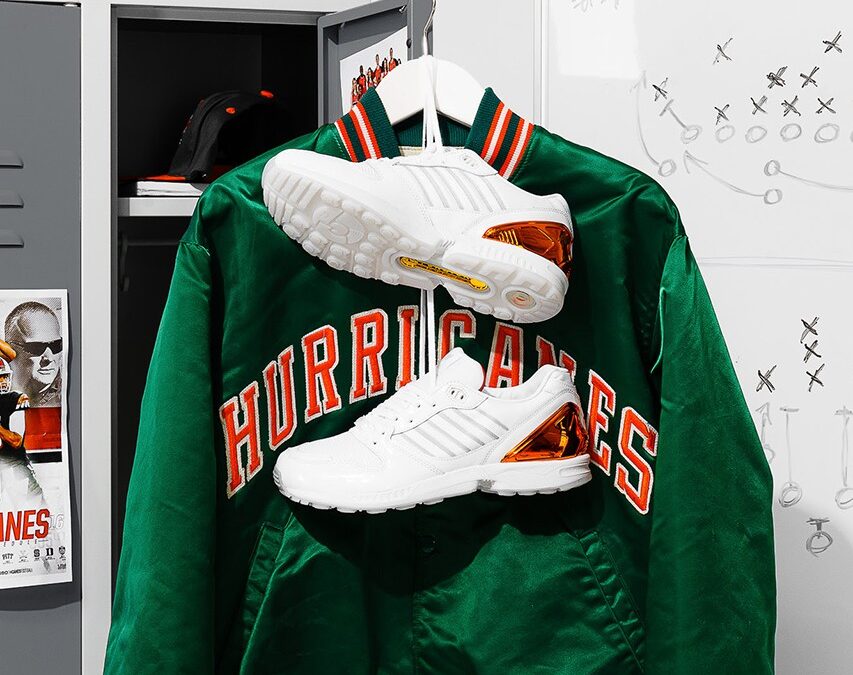 From the Hey Tea ZX 7000 to LEGO’s ZX 8000, Adidas Originals’ “A-ZX” series has delivered many a bold sneaker, and now reworking the ZX 5000, the Three Striped brand has tapped the University of Miami for “U”.

Originally debuted in 1989, the Adidas Originals ZX 5000 was a serious runner and casual alike, equipped with a Kelvar torsion system and a large external heel cage that distinguishes the shoe from other ZX models that released in ‘89 – such as 4000, 6000, 8000, and 9000.

Serving as a homage to the ZX 5000, the Miami Hurricanes, and the University of Miami’s heritage, delivering revised elements using the esteemed institution’s sporting colorway. This collaboration has electroplated TPU heel counter appearing in orange and green – split down
the middle at the rear, while the Three Stripe branding appears in white with shadowing reminiscent of that found on the OG ZX 5000.

The upper being constructed using white patent leather and ballistic nylon, co-branded lace jewels, sock liners, and tongue tabs have been added to round out the collaborative pair. Embedded into the outsole, a contrasting gold-chrome electroplate Torsion bar, complete the whole look.

The University of Miami’s Adidas Originals ZX 5000 releases globally on November 6 at select retailers such as Overkill, as well as on the Adidas website, and will cost $140 USD. Take a closer look at the limited-edition pair below.