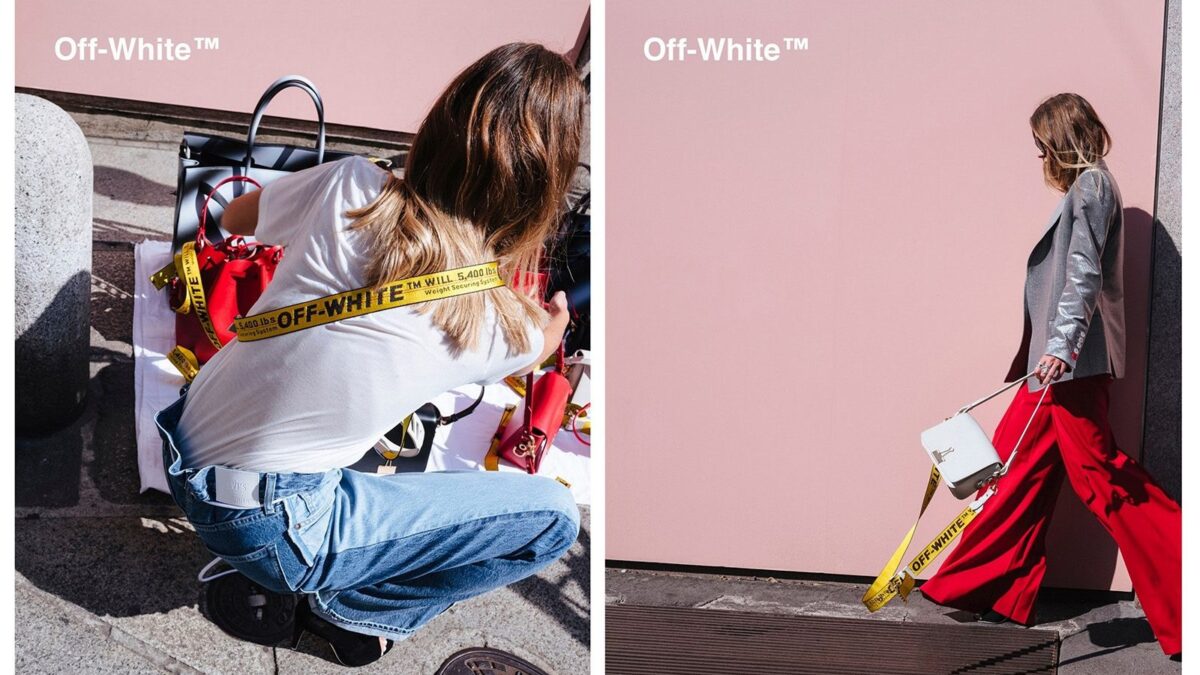 Appearing to be an interesting parody case, the lawsuit that Off-White filed against Afters Ice Cream in November. A quick rundown of this is: fashion/streetwear brand Off-White filed suit against California-based ice cream chain Afters, claiming that it is piggybacking on the esteem and appeal of Off-White by way of an array of “merch” offerings, namely t-shirts and sweatshirts, as well as decorative store elements that make use of Off-White’s diagonal stripe motifs and in some cases, other aspects of the well-known brand’s trademarks

Virgil Abloh’s company argues in the complaint filed with a California federal court late last year that by “manufacturing, advertising, marketing, promoting, distributing, displaying, offering for sale, and/or selling products” that make use of  “one or more of Off-White marks,” and affixing “confusingly similar [or] identical” signage and interior decoration to its stores and pop-up outposts, Afters is looking to “confuse consumers into believing that [its] products are Off-White products and/or that [it or its] business is affiliated with Off-White” when there are no such ties between the two companies.

Off-White put forward “significant common law trademark” rights for its name and various logo marks, and five federal trademark registrations for its “fifteen alternating parallel diagonal lines of varying sizes” marks, most of which are registered to use on garments and accessories, but one of the registrations includes use in connection with “retail store services featuring apparel, footwear, fashion and clothing accessories,” among other things – as the basis for its claims.

After sets the stage for what is to come in its newly-filed answer, denying “any infringement of any valid trademark owned by [Off-White] or any involvement in any alleged infringement of any valid trademark owned by [Off-White],” also declaring seventeen affirmative defenses, which range from lack of damages (even if it did infringe Off-White’s trademarks, After argues that Off-White “has not been injured or damaged as a proximate result of any act or omission for which [Afters] is responsible”) to failure to state a claim upon which relief can be granted.

The highly-Instagrammable ice cream chain claims that it should be shielded from liability on parody grounds, which is among the laundry list of affirmative defenses that After cites in its answer. A potential defense to trademark infringement, parody has been defined as “a simple form of entertainment conveyed by juxtaposing the irreverent representation of [a] trademark with the idealized image created by the mark’s owner,” as a judge for the U.S. District Court for the Southern District of New York put it in the Louis Vuitton v. My Other Bag case, citing the U.S. Court of Appeals for the Fourth Circuit’s decision in Louis Vuitton Malletier S.A. v. Haute Diggity Dog, which was citing the 2001 decision from the Fourth Circuit in PETA v. Doughney.

Afters did not copy-and-paste the Off-White name and striped branding for its t-shirts and sweatshirts on its own; it has included some additional elements, so parody could be a relevant argument in this case. For instance, instead of using the full Off-White name on one of its t-shirt styles along with the diagonal stripe square, the Afters garments read, Off-Diet, a seeming play on the calorie count of ice cream. It has performed similar mischieve with other buzzy brands from Anti Social Social Club (its version is “Anti Diet Diet Club”) to Kanye West’s Sunday Service, complete with “Ice Cream is King” and “Sundae Service” taglines.

Afters argues in a separate affirmative defense that even “assuming that [it] used any trademark owned by [Off-White],” its use is permissible because Off-White’s “alleged trademarks have no secondary meaning.” Or we can say that Afters claims that consumers do not associate Off-White’s non-distinctive marks, including its diagonal stripe logo, with a single source, preventing them from actually functioning as trademarks, which clashes with Off-White’s assertion that as a result of its “use, advertising and promotion of” its various graphic marks, as well as “the word-of mouth-buzz generated by its consumers,” its products and its various trademarks are “prominently placed in the minds of the public,” thereby, giving rise to secondary meaning.

Afters argues that Off-White’s trademark claims should be dismissed because the brand “has abandoned its rights in and to the alleged trademarks through acts,” such as “failing to adequately police and protect its allegedly protectable trademarks,” referring to other uses of similar marks by third parties, in all probability.

Afters argues with the foregoing and other defenses in mind that, Off-White’s complaint – and its trademark infringement, false designation of origin, and unfair competition claims –  should be dismissed entirely, with “judgment entered against [Off-White] and in favor of [Afters].”

It would be somewhat unsurprising to see whether relevant consumers are able to link these symbols with a single source, given Off-White’s pattern of co-opting and registering (or in some cases, actively seeking to register) otherwise ordinary symbols as trademarks – from crosswalk-inspired diagonal lines and the use of quotation marks to stylized arrows that appear on no shortage of packaging and zip ties. Afters does not set out any counterclaims seeking an invalidation of the registrations, despite essentially arguing by way of a few of its affirmative defenses (i.e., lack of secondary meaning, abandonment, and non-infringement, in connection with which Afters alleges that it “has not infringed any of [Off-White’s] allegedly protectable trademarks,” etc.) that Off-White’s marks, including its various diagonal stripe marks, do not serve as trademarks.