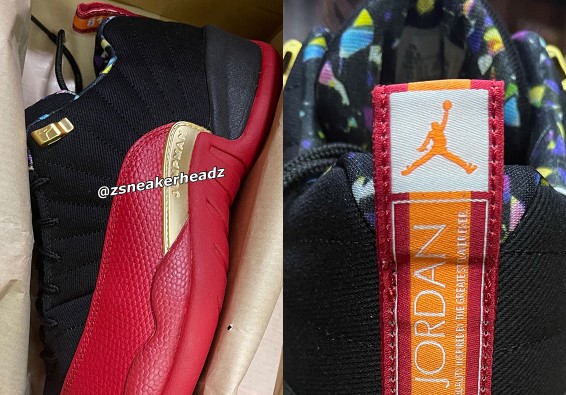 We’re inching closer to crowning the league champions, with the Wild Card round in the 2020 NFL Playoffs a wrap, this will make up one of the most unprecedented Super Bowl showdowns in history. On the eve of that big game, Jordan Brand will commemorate the final Super Bowl LV battle with a special Air Jordan 12 Low release that blends the familiar “Flu Game” colorway with a confetti-like pattern on the interior.

According to the photos provided by @zsneakerheadz, the upper’s flaunt that classy black/red look, with the standard snake-textured mudguard and new canvas-like material which may suggest a tear-away detail that reveals the wild pattern beneath. Hits of gold on the midsole as well as the heel ribbon lend to clear a Tampa Bay Buccaneers uniform look, providing a possible nod to the hosts of the big game. Even the shoe-box is remixed to reflect the festivities as the classic red-top box gets covered with the same fractal confetti look.

Currently, a release date for February 6th, 2021 is confirmed, with an MSRP of $190. Expect these at Jordan brand retailers across the nation.

KENZO and Vans partner up for a footwear collaboration