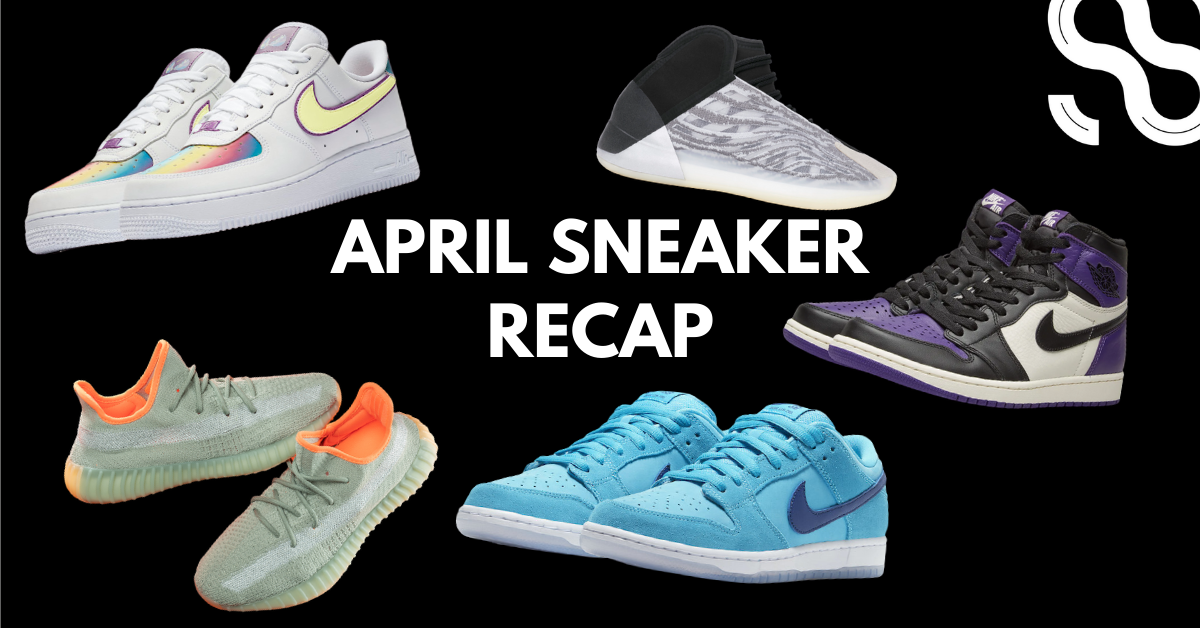 As the world moved into a lockdown following the Covid-19 pandemic, we saw the sneaker game slow down for a bit, but with mid-april we started to see the progression as Nike and Adidas started dropping heat yet again.

Kicking off the 2nd quarter of 2020, we had two very beautiful dunks indulging in two vibrant color schemes. The Nike SB Dunk Low Blue Fury was one of the most beautiful pair of dunks that was dropped on the SNKRS app. It was accompanied by the Nike SB Dunk Low Muslin, which in its own way is a gorgeous piece of work by the team over at Nike SB.

Moving on, we received a rather interesting drop by the Jordan brand. One of the most unique of the month, Air Jordan 7 Hare 2.0 was released without much prior information. We dont expect these to perform well on the market but they for sure prove to be a great personal cop to put on in any season of the year.

11th of April was the date, which was marked on every reseller’s calendar as we received easily available yet profitable sneakers. Dropping in almost every location worldwide including India through online drops via select retailers, the Air Jordan 1 High OG White Court Purple didn’t take much time to win the Jordan 1 fans’ hearts.

The same day itself, Adidas dropped the Adidas Yeezy 700 V3 Alvah, another triple black Yeezy that Kanye had envisioned. With the 700 v3 having an either love it or hate it with the Boost fans, this sneaker didn’t take much time to be tagged under sold out.

This next Yeezy is undoubtedly one of the most beautiful 350 v2 released in 2020. Adidas Yeezy Boost 350 V2 Linen created a mesmerizing contrast with the dual-tone colour scheme and one of the first Yeezy 350 v2 to double its value over time. These saw an Indian release as well via Veg Non-Veg and SuperKicks on 23rd of May.

This wasn’t the first time we saw an iconic colourway getting a “reverse” patch up. This time around it was on the sensational Dunk High Skunks, its reverse iteration the Nike SB Dunk High 420 Reverse Skunk was one of the most influential dunks to be released in 2020 and topped the charts with astronomical profits for the resellers. Very limited in number they sell for over the massive 20 grand mark.

Finally we had a SuperKicks drop featuring the BBC Ice Cream X Reebok Answer V in a funky color scheme.

We also saw these great sneakers release in the month of March.

We’ll be coming back with more heat-highlights. Stay tuned for the craziest sneakers that dropped in the month of May.