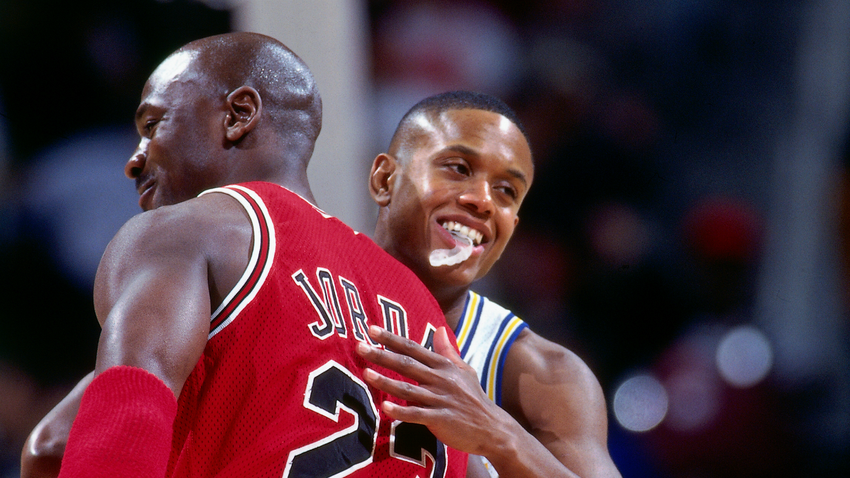 After clinching an easy win for the bulls in the first game of the eastern conference semifinals, Michael Jordan faced an unexpected tuff competition from the Charlotte Hornet’s which led to thier loss in the second game. His former teammate Bj Armstrong’s knowledge about the bulls gameplay and thier weaknesses was the reason why they lost the game. Armstrong had earlier won three rings alongside Jordan and knew every single thing about the bulls inside out. But you know Michael Jordan, he made it personal and after the 2nd game it was a complete sweep and the bulls advanced to the finals.

Although he was a rival of Jordan after getting drafted to the Hornet’s in 1997, Armstrong was very supportive toward Jordan in terms of business and also stated his perspective by saying that Jordan was doing something that had never been done before. He looked at it as a business created inside a business.

Armstrong was playing against Mj by lacing up a pair of “team Jordan 1” which was quite ironic. This fact only came to light when his 19 y/o son pointed it out while watching the latest documentary on the bulls legacy, “the last dance”. The fact was somewhat conflicting but Armstrong believes that there was no competition in the sneaker market back then and he used to wear a pair of Jordans just to support him as a friend and felt that it would benefit all players as a whole.

Even Jordan supported Armstrong on the sneaker side which is clearly evident from the fact that he wore a player exclusive pair of Jordan 9 which was only a handful of people had access back then, during the 94-95 all-star game. Armstrong said that he didn’t think twice about wearing it. The pair of shoes which he wore was a part of the historic set of shoes created for players to wear in the league. This was done in the year when Jordan took a retirement after the tragic death of his father. The following players: Kendall Bill, Penny Hardway, Harold Miner, Mitch Richmond, and Latrell Sprewell got similar personalized pairs that season. This was the first time in the history of “Air Jordans” where sneakers were personalized for players other than Jordan himself. Armstrong also added that it was because of Jordan’s retirement that he made it to the “94′ All-Star” game, so to just show a sign of respect and appreciation he wore the shoes. He claims that he still has the pair tucked away among his relics from his playing days.

Before making it to the NBA, Armstrong was a part of the Hawkeyes in 1985, a prominent college basketball team of that time. He remembers that the team was outfitted with the first round of Nike Dunks from the classic ” be true to your school” series. The Nike dunks were originally black and yellow in color and was reinterpreted in 1999 for an extremely exclusive Wu-Tang collaboration. The “WU-TANG” always reminds him of his college days basketball kicks.

Though Armstrong was not a sneaker superstar from the 99′ era, he played a pivotal role in sportswear history. Be it owning Nike dunks way before people even heard about them, or being a part of the camaraderie and rocking “black sneakers” postseason along with his whole team or having an exclusive pair of personalized Jordans, Armstrong was giving the young brand its very first spotlight moment. Even though the thought of wearing a sneaker made by a brand owned by your rival is quite strange, Armstrong who was a former teammate of Jordan never felt odd in doing so and only did it as he thought it was helping his brother( referring to Michael Jordan).