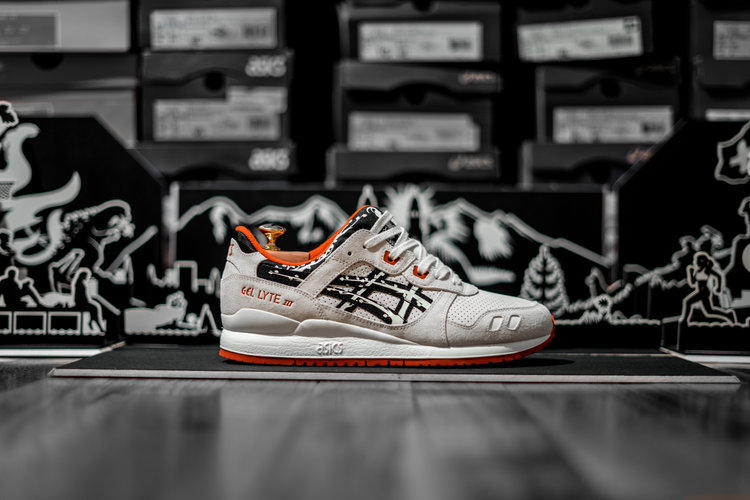 Asics Gel-Lyte III: Legacy of 30 years -The Shoe That Can Turn A ShockWave Into Ripple

Kihachiro Onitsuka who was Japanese entrepreneur and Footwear pioneer founded Onitsuka Co Ltd after the destruction of Japan after World War II . He believed that through Sports/Athletics he could lift the self-esteem of the post-war youth. The organization was named as “Onitsuka Tiger”.  Asics is today one of the most popular brands in the sneaker world, with an archive filled with classic silhouettes.

In 1977, Onitsuka Tiger, Jelenk (a knitwear manufacturer) and GTO (a sportswear and net manufacturer) joined forces to create ASICS, forming a regional sales office after their work together. ASICS takes its name from the term “anima sang in corpore sano” in Latin, which translates as “a healthy mind in a healthy body” which became the Mr. Onitsuka’s mantra throughout the development of the company.

Originally launched back in 1990, the Asics Gel-Lyte III trainer takes pride of place among the brand’s most famous silhouettes. For decades, Onitsuka Tiger (which later would become ASICS) has been making sports sneakers, capturing both the hearts and minds of athletes and sneakerheads. Since the brand’s conception, Asics ‘ goals have been to create the best available sport performance trainers, with celebrity athletes sporting their shoes including Olympic Gold medalist Abebe Bikila, Kenji Kimihara, and Derek Crayton.

Now one of ASICS most iconic sneakers is celebrating its 30th anniversary; the Gel-Lyte III by releasing mita x ASICS GEL-Lyte III OG ‘Trico 2020’ back in January 23rd And then releasing  GEL-Lyte III ‘Kobe Beef’ for 30th Anniversary.

Better than an air walking? ASICS design team had worked tirelessly to create a sneaker with the potential to further help runners. It had finally developed a technology in 1986, which had the ability to convert impact force into energy. This technology was called ASICS Gel. Following extensive testing in real-life running tests, ASICS sought an alternative to air systems ‘ impact-softening power: silicone-based gel, produced by Japanese company Taica under the brand Alpha GEL. The substance was already being used in ballpoint pens and rocket technology and it proved to be a wonder. Injected into the running shoes ‘ EVA midsole, Alpha GEL has proven effective in diverting the vertical force of impact while running into horizontal – or forward-pushing – power.

The rest, that’s history. ASICS appointed Taica as its official manufacturer and initially announced the new technology under the name Alpha GEL Device in 1986. KABOOM! The running community embraced the space-age cushioning technology as the solution to reducing impact-related injuries, minimizing friction and maybe even shaving off those long distance running records for a few key seconds. Everyone was watching and now ASICS just had to pack this new tech into banging silhouette and that’s where GEL LYTE – III came into existence.

The company was making progress after breaking into the North American and European markets in the same year with the ASICS GT-II. It would not be until 1987, however, that the innovative new silicone device from ASICS would truly make its mark in the form of the ASICS Gel-Lyte. Things seemed to have been looking up for ASICS Tiger.

When the Gel-Lyte ASICS was revealed it really was a groundbreaking sneaker. The advertisement advertising the sneaker read “Speed freaks, we have your call… it’s 9.9.” ASICS really just weighed 9.9 ounces in the first foray into the Gel-Lyte form, about the same weight as a regular magazine. A big hit with runners was the sneaker, marking the beginning of an exciting time ahead of ASICS.

Shigeyuki Mitsui probably didn’t realize it at the time but in 1990 he was going to change the sneaker industry forever. He has built an ASICS sneaker from scratch for the third time. Nevertheless, in an interview with the late great Gary Warnett, getting the concept accepted was not as straightforward as Matsui-san recalled

“There were people in design division that are not so intelligent—especially me! I’m really foolish. So the intelligent opinion [when designing a shoe] is very theoretical and considered. This creates high-quality performance shoes, but too much theoretical consideration in designing can lead to a boring design. Too simple and too clean.”

The GEL-Lyte III, was the most famous entry in the series, attracted footwear fans because of its streetwear shoe accessibility. Athletes and fashion-fans alike took on the GEL-Lyte III, which was no longer tied only to the track. A key selling point alongside the quirky reflective heel panel was the innovative split-tongue, and the III is commonly considered to be the most comfortable GEL-Lyte model.

The vision for the Gel-Lyte III was consistent with the brand’s goal, with several new innovative features featuring a performance-focused design. Although Asics had been using dual-density soles for a number of years, it was Mitsui who came up with the idea of a tri-density sole for the Gel-Lyte III. Much more difficult to control and produce than its predecessor, Asics initially rejected the tri-density sole until its engineers realized how the extra density had a dramatic effect on the wearer’s ride and movement. Mr Mitsui looks to this new technology as his first move in designing his ideal running trainer in an attempt to deliver unrivaled cushioning and transition. It was a real game changer, with the tongue dipping down the middle as runners jumped into the pair, only to contract and lock in the foot for an ever-so snug fit.

The GelLyte III is no doubt one of the best sneaker from Gel Lyte release. It has proved to be a game changer for ASICS.

It had earned a lot of attention and respect from both athletes and sneakerheads, taking pride in using innovative technologies. The Gel-Lyte III concept of split tongue construction became the Gel-Lyte III’s trademark over time and has become a favourite feature among retro runners and collectors, making a revival in 2007 thanks to a few retailers, due to ASICS ‘ forward-thinking approach.

It was the ideal opportunity for the Gel-Lyte III to return. When Patta, the Amsterdam brought up retailer, was allowed to team up on the ASICS Gel-Lyte III, Patta knew it was bringing back a symbol. The sneaker must have been ideal for a large number of reasons. For one, it was Patta’s first joint effort with the Japanese brand. Besides, it had been given one of ASICS most prized plans to deal with. The weight on Patta was high. Fortunately, Patta nailed it on point.

Taking motivation from their home city Patta hung the GL3 in a dark, green and red upper, highlighting traces of the city all through, including the three cross logo on the insole. The shoe was a moment hit with Amsterdammers and caused Patta to have it’s first-ever campout so as to get the shoes. The Patta ASICS Gel-Lyte III had officially reignited Gel-Lyte III lunacy.

Subsequent to seeing the sneakers gathering, Ronnie Fieg, who at that point headed up New York tennis shoe store David Z was allowed the chance to celebrate the stores 25th birthday celebration with a restrictive Gel-Lyte III. This wouldn’t be the last Ronnie Fieg ASICS Gel-Lyte III joint effort, with Fieg advocating the outline for his new image Kith a couple of years after the fact. ASICS Gel-Lyte IIIs were never all over the place, with the shoe making a colossal rebound from 2007 onwards.

“They [ASICS Europe] said that the Gel-Lyte III had become extraordinarily well known a couple of years after the fact. I thought it was fantastic” Matsui-san told Warnett. Advertised joint efforts with pretty much every shoe store on the planet implied that ASICS was situating itself to assume control over the market. Gel-Lyte IIIs had now gotten a collectable sneaker, held in a similar light as Air Max and Jordans.

For some sneakerheads, it was the first occasion when that they had run over the sneaker. For other people, it was an invite come back to one of their old top choices. The 25th anniversary of the GL3 in 2015 implied that a series of collaborative efforts followed, with any semblance of Footpatrol, Hanon, Patta and Kith all chipping away at the shoe. It’s 30th anniversary and Gel Lyte III is still banging in the market with collaborations like Mita.

Even after 30 years, the GEL-Lyte III remains one of the most beloved and recognizable silhouettes in footwear history, joining icons like the Nike Air Max, Adidas Stan Smith, Puma Suede and a few more. As the ASICS Gel-Lyte 3 is turning 30, the brand has begun releasing some of the original colorways.

It also marks the end of another ASICS journey, with GL3 creator and prolific innovator, Shiegyuki Matsui confirming that this will be his last year of ASICS service. Having been with the brand for more than 30 years now is the time for him to reap his successful retirement. With all its advanced tech, the GLIII stands out more for its impressive beauty in the current sneaker scene. This is quite impressive when you know that on its visual design, Mitsui had to compete against his higher-ups.

The Gel Lyte III was the first type of ASICS to highlight its presence. Senior members of the development team within the organization emphasized that this was needless and that everything was about what was inside the shoe.

Luckily, they would finally surrender. Of course the rest is history. Fortunately, the GLIII refuses to get lost in history.

The Air Jordan 4 “White Cement” returns… with some tweaks