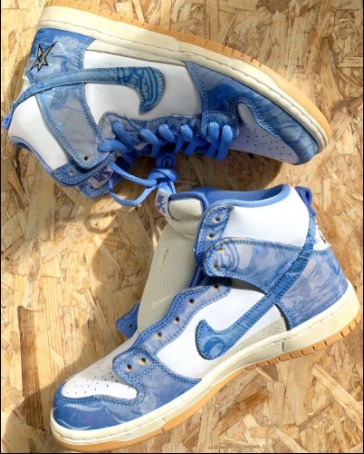 Although the Carpet Company, a Baltimore-based skate brand is a newcomer to the industry, it’s already making waves big enough to catch the attention of Nike SB.

Carpet Company has grown a cult of streetwear, following thanks to its playful graphics, high-quality puff prints, and unique accessories. Founded in 2015 by two Arab brothers (Ayman and Osama Abdeldayem), the brand expands its repertoire through an SB Dunk High collab.

The early version of the shoes includes a white leather base with graphics printed on a canvas blue base. Further details include a yellowed tongue and midsole with hidden branding throughout, including on the tongue tags, outsole, and heel, which further round off the look.

The Carpet Company x Nike SB Dunk High PRM QS is set to drop early in 2021. Readers should note that this confirmed to be a first sample of the collab and that the final retail version will look different.