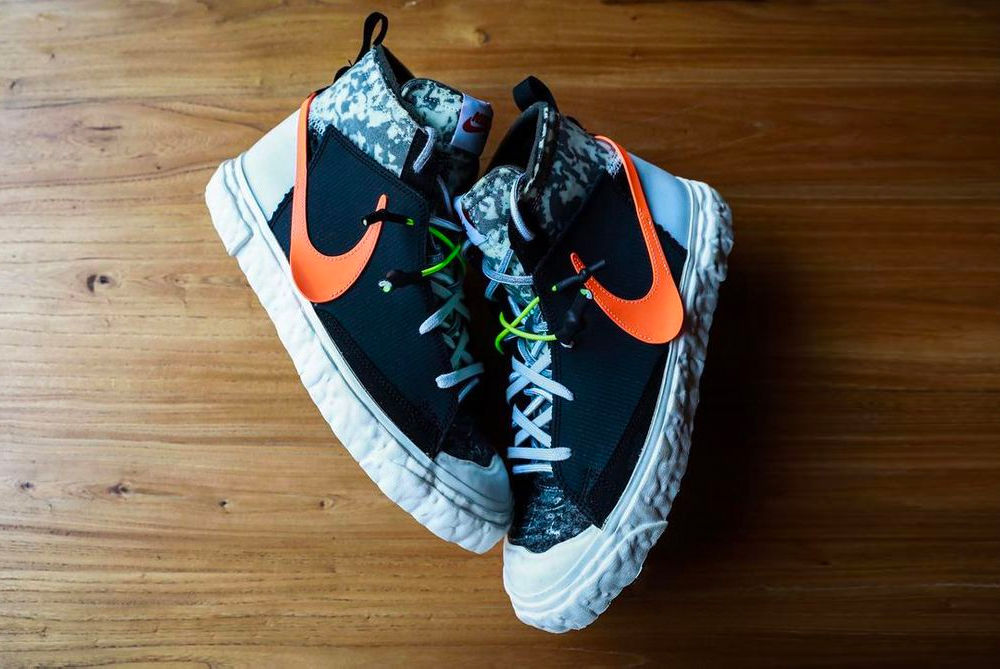 We now have a detailed look at READYMADE and Nike’s unique black and white orange Blazer collaboration which was first teased last October. The design is centered around a cobbled-together ethos that tinkers with standard footwear geometries and even introduces an element of sustainability, which is conceptualized by READYMADE founder Yuta Hosokawa.

The uppers, offer black fabric quarters that are delicately attached to collars and throats made foam material with a camo-like black and white print, and seems to be built to suggest that they could fall apart at any minute. Laces are tripled up, offering a split between gray ovals, neon green bungees and white flats, none of which run the full length of the throat.

The shoe’s most instantly notable details are served up by the orange Swoosh and the white midsole, aside from the unhinged build. The Swoosh, which is severely thinned out towards its crest and heel, while the middle retains full-thickness, is also partially secured to the upper having no stitching on its lowest point or its back pieces. Meanwhile, the midsole provided a bubbling texture that almost looks as if it was heated to the point of melting before being left to cool.

Other details include a white synthetic heel piece with a hybrid tri-Swoosh/READYMADE graphic, large black heel tabs, a modified Nike Sportswear hit on the tongue tag that reads “NIKE/RE” in red and black, and a rubberized toe cap. Rounding out the look are outsoles which appear to be constructed of sustainable Nike Grind rubber.

A release date for READYMADE’s unique Nike Blazer has yet to be announced, but expect it to arrive alongside a blue/white colorway sometime later this year.