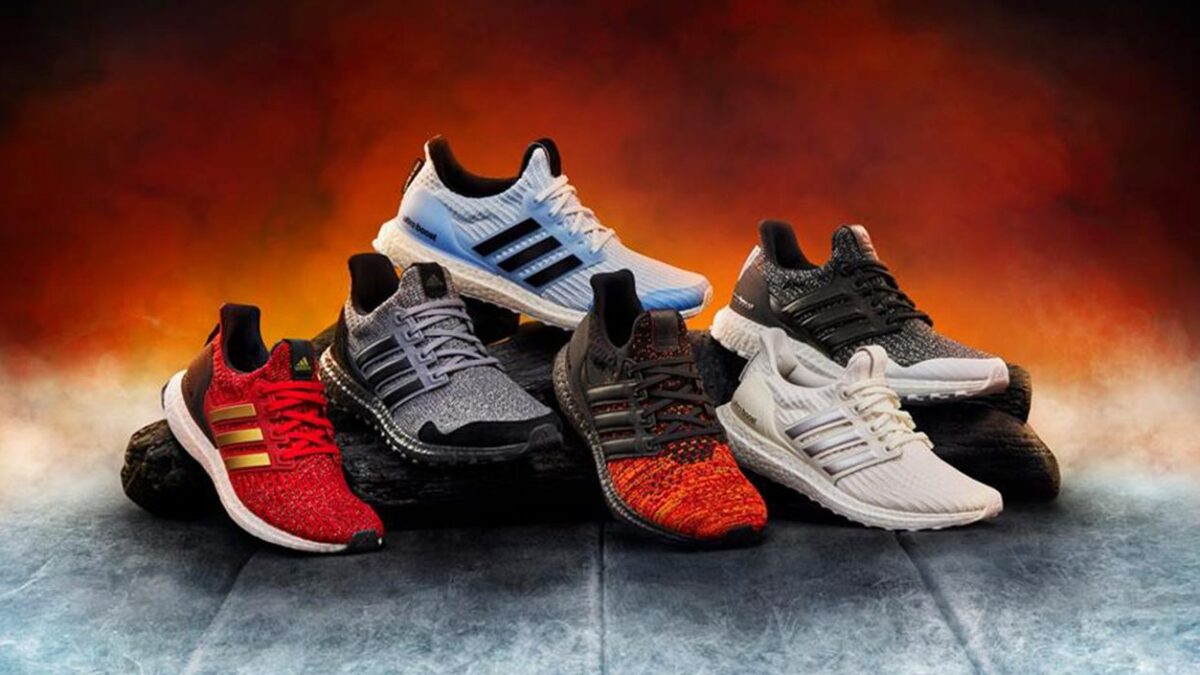 Since we all are heading to an apocalyptic phase in April 2019.

THE FINALE SEASON TO GAME OF THRONES

Before the final season, ADIDAS has collaborated with GAME OF THRONES to give out some of the sickest colourways of their critically acclaimed trainers/sneakers ULTRABOOSTS

Two of the best things to happen to the MILLENIALS : Game of Thrones X Ultraboosts

And who would have thought there could be a crossover like this!!

Before I tell you everything you want to know about this collab!

I want to thank adidas and GOT for doing this

Dropping on 22nd march, can’t wait for that day.

Now let’s get on with this

Basically, Adidas has reimagined all the characters and houses of Westeros and has built 6 pairs of super limited ultraboosts.

Besides the colourways, looks and aesthetics of the houses from westeros, the details on the shoe includes their faction’s sigil on the tongue and motto on the heel tag.

Now coming on to the pairs: 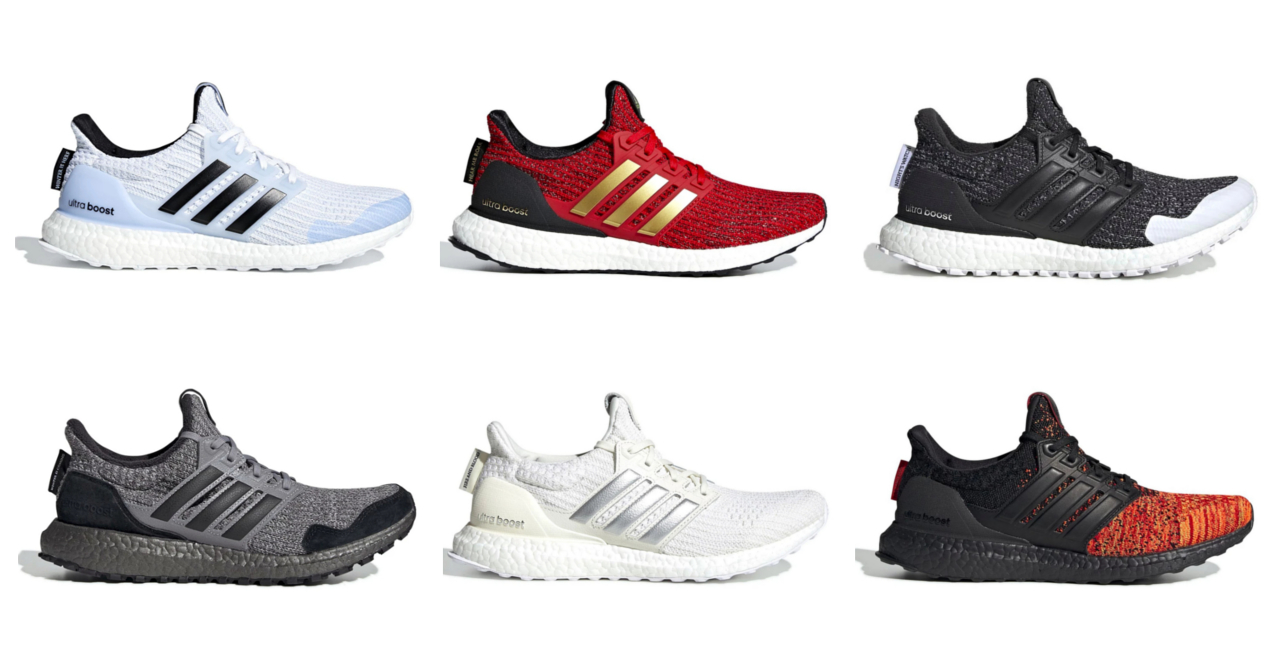 They are the guardians of all the seven kingdoms stationed at the north guarding the infamous wall from the whites. Now since the wall is completely made out of ice, all the watchers wear heavy black coats .

Ultraboost Takeaway : It has been decked out in a black and white Primeknit upper, which most likely represents the garb worn by the Night’s Watch. The white mudguard, Boost midsole, and outsole could be said to represent the snowy and icy north. A leather lace cage completes the look, most likely symbolic of the heavy leather and armor worn by the Night’s Watch. A heavier tread on the outsole, as well as a fleece sock liner also play into the winter theme. 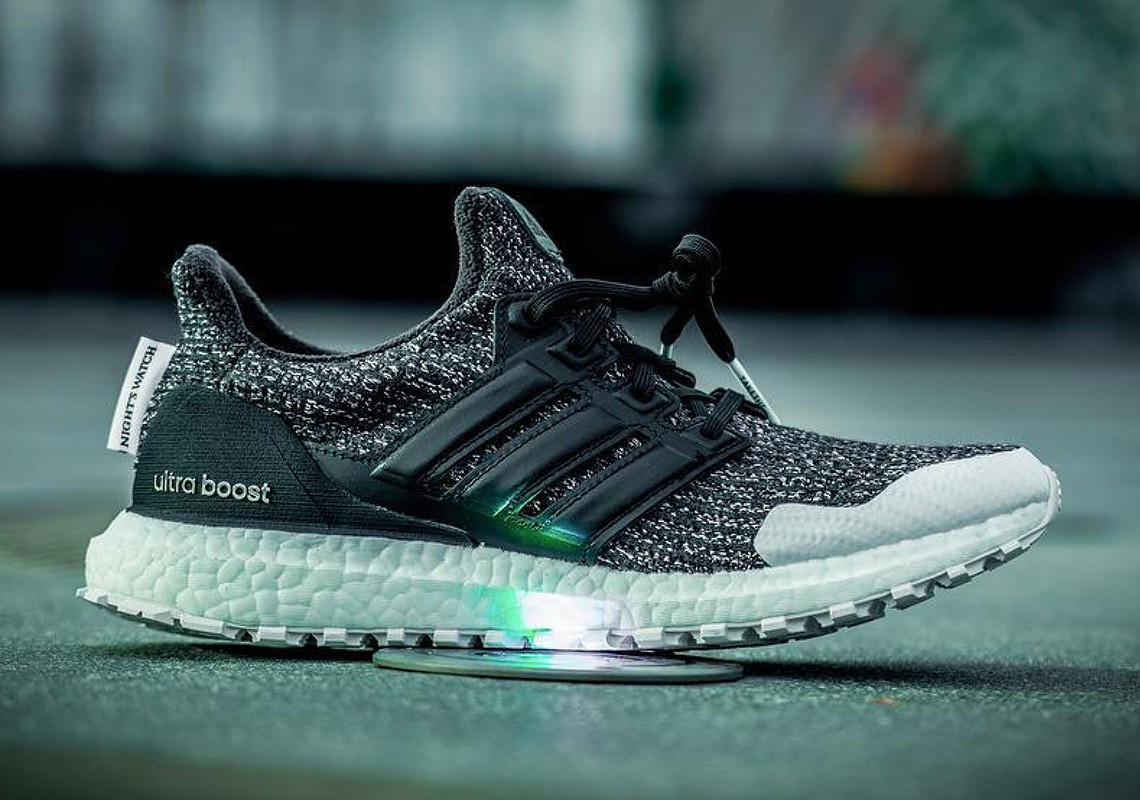 They are the undead creatures from the north with just one thought in their head(if at all they have one) : DESTRUCTION. As their name suggests, they are white, icy blue and frozen.

Ultraboost Takeaway: It is dressed in primarily white Primeknit, with hits of contrasting black on the tongue, liner, and three Stripe branding. The lace cage, heel cup, and mudguard are a translucent, icy blue, another color seen on some of the White Walkers.

The main phrase of the show “WINTER IS COMING” is present on the heel as clearly the walker will be here this season arrives. 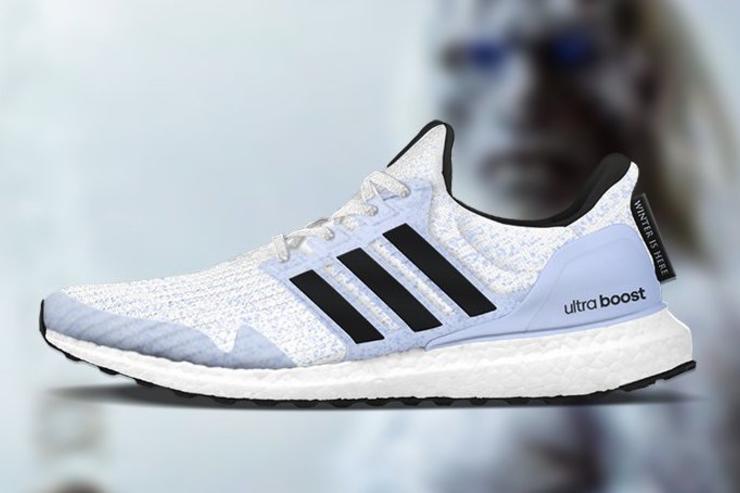 The warden of north, that’s what best describes the starks. Their sigil is a direwolf of a white background and their colours being black and grey

Ultraboost Takeaway: It has a dark grey Primeknit upper is complemented by hits of black on the lining, mudguard, Boost midsole, rubber outsole, heel cup, and Three Stripes branding. The house’s motto, “WINTER IS COMING” , is sewn onto the heel as a tag. A heavier tread on the outsole, as well as a fleece sock liner also play into the winter theme. 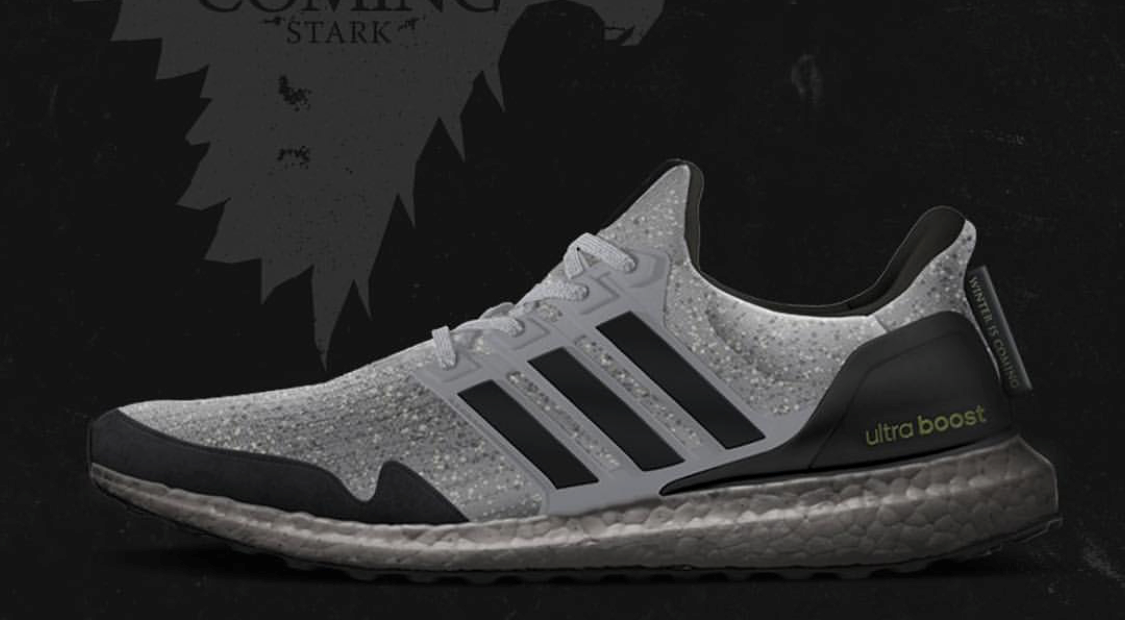 These former rulers of Westeros, with their sigil being a three headed dragon, having being defeated by the rebellion of Robert baratheon and ned stark has been the first inspiration for the ultraboost.

First :  Fire and blood being marked on the heel of these kicks, they take their first inspiration from their relationship with dragons. A black and red, gradient Primeknit upper is an obvious allusion to the fire dragons breathe, as well as the official colors of House Targaryen. An all-black Boost midsole and outsole combination, as well as a black lace cage and heel cup add to the dark and dangerous theme. 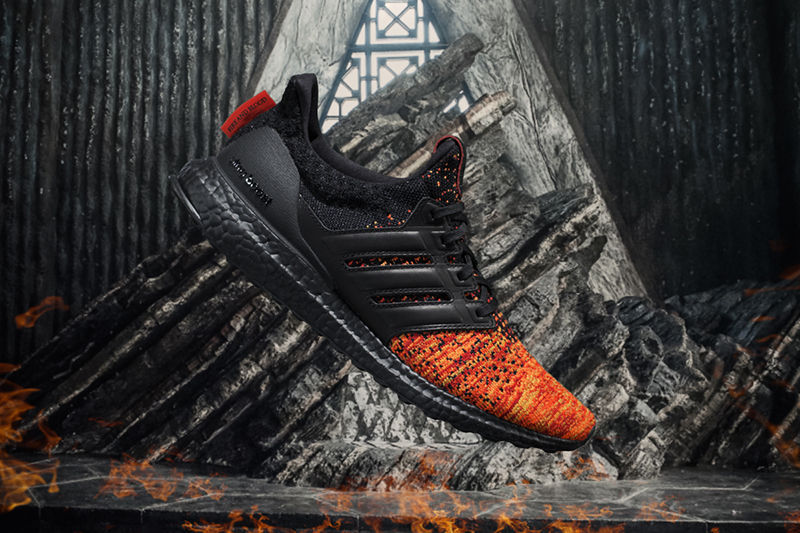 Second : It is all white, with cream and silver accents on the laces, lace cage, heel cup, and heel tag. The Targaryens are an old noble Valyrian family (the former name of the territory east of Westeros), and are known for their distinctly Valyrian features (namely pale, white skin and strikingly silver hair). 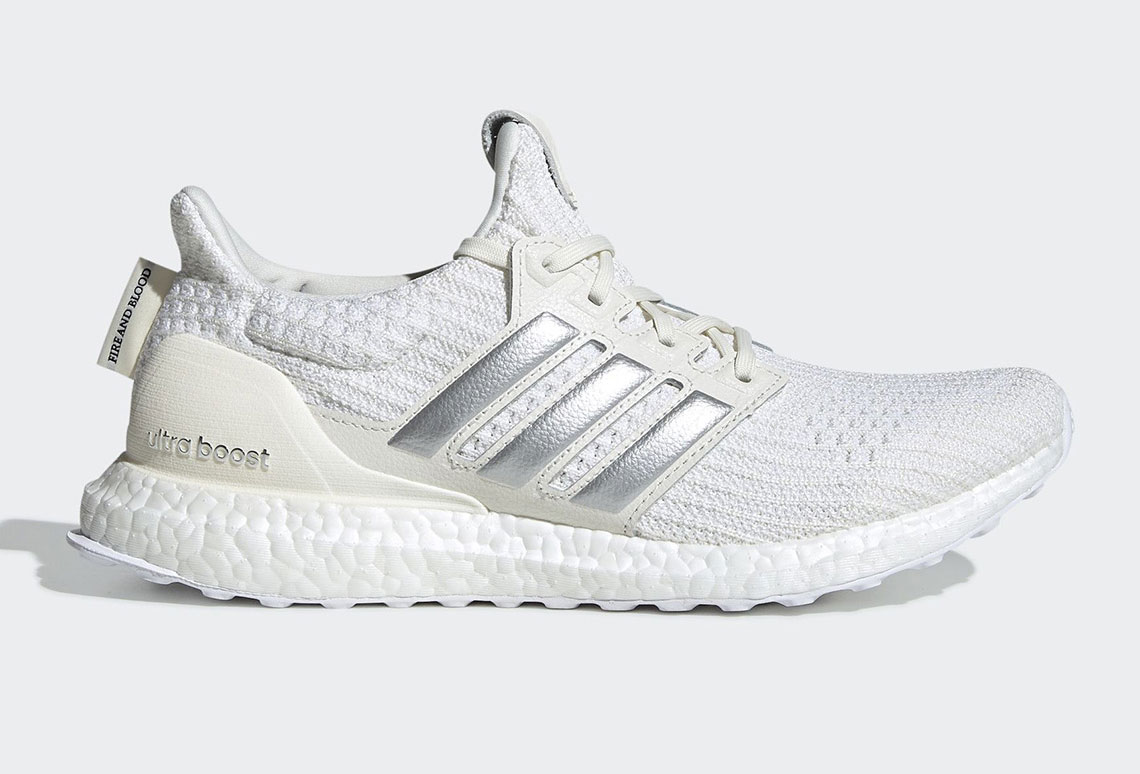 The current rulers of Westeros and the richest family present out there. Most powerful or not is still debatable. Their sigil is a golden lion

Ultraboost Takeaway : The red Primeknit upper is a clear nod to the house’s colors, as well as the family’s status as the ruling monarchs of Westeros, due to crimson’s regal connotations. The gold Three Stripes branding is, again, a reference to the house colors, but can also be taken as symbolic of the riches the Lannister’s possess. The heel says, Hear Me Roar. 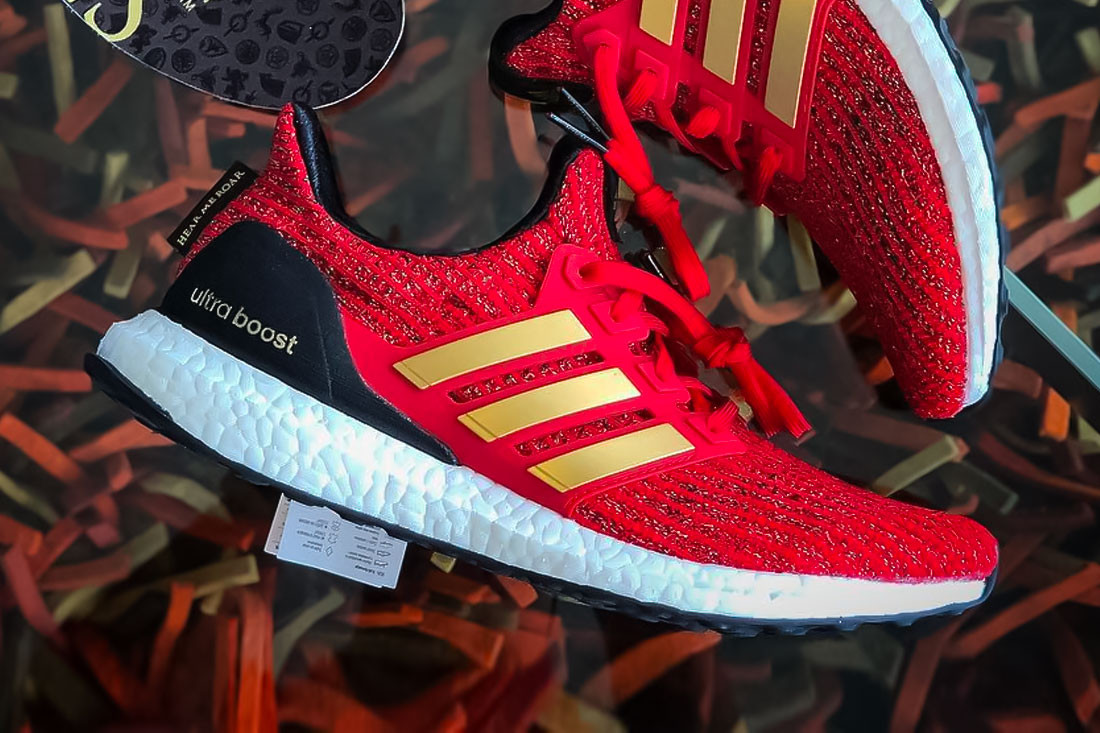 So that was all about the Game Of Thrones X Adidas Ultraboosts.

Can’t wait to have them on my feet, if not all at least one

But guess what they are super limited in quantities

And are present at very few outlets.

Veg Non Veg, and Superkicks India will for sure have it…

Asics Gel-Lyte III: Legacy of 30 years -The Shoe That Can Turn A ShockWave Into Ripple