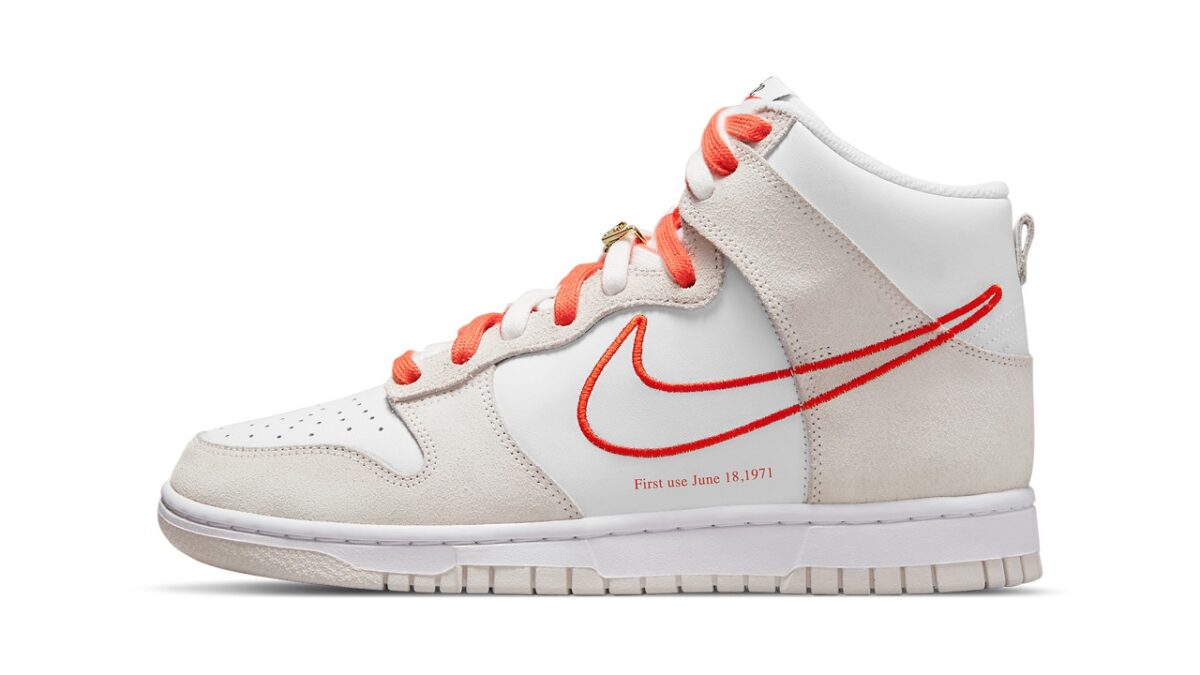 To celebrate the 50 years of Carolyn Davidson‘s famed Swoosh logo in 2021, Nike launched a Sportswear “First Use” capsules that features the popular Dunk High in majority alongside other silhouettes. After initially arriving in White/Green and “University Red” makeups, the Dunk High “First Use” has returned for good, dubbed in a light-toned colorway with familiar orange accents.

The uppers of the Dunks are crafted of White leather and Tan suede, the former of which is used on toeboxes, quarters and collars while the latter graces the mudguards, eyestays, heels, heel tabs and collar flaps. The Swooshes appears in Nike’s signature orange shade with the lateral side featuring a thicker, shorter, outlined Swoosh that doesn’t connect with the heel tab. On the other hand, the medial side offers a standard solid Swoosh that runs all the way back. Under the lateral Swoosh it is printed “First use June 18, 1971 hit,” which leads to a question of why it didn’t release on June 18?

Apart from the confusing release schedule, the remaining details appear on top of the white mesh tongue. The shoe also boasts a sacai-style doubled up laces in white and orange, a metallic gold Swoosh charm with a classic Nike tongue badge. On the back side of the tongue, a text explaining the shoe’s inspiration is engraved while the insoles provide a timeline of the Swoosh’s evolution. Down below, the white midsoles and orange outsoles complete the look.

The Nike Dunk High “First Use” in orange is set to release later this year, and will be priced for $110 USD . Grab a look at them below.