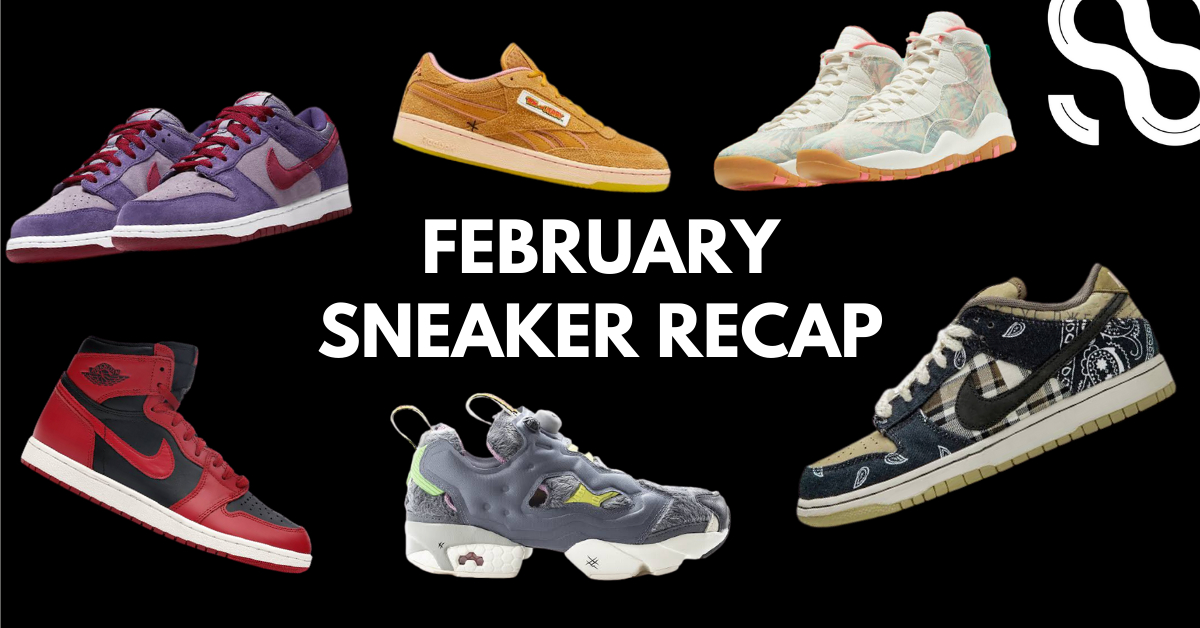 The month of February proved to be one of the greatest months of 2020 for the sneaker fanatics. With the likes of Virgil Abloh and Travis Scott dropping their long-awaited collaborations that the entire sneaker community had their eyes on.

We kicked of the shortest month of the year with a lively pair of the Jordan 10s, also dubbed as the most comfortable retro Jordan ever. The Air Jordan 10 Super Bowl LIV feautred a very unique colourway, as it’s designed with a tropical theme inspired by the game’s location.

Coming on to a very unique collab in its own way, Reebok Classics dropped a dual sneaker collab in India through select retail outlets. The reebok classics X Tom & Jerry Club C Revenge MU and the Instapump Fury OG released exclusively at the Superkicks webstore along with the Mumbai and Delhi retail stores.

With SB Dunks absolutely dominating the sneaker game in 2020. We received a re-release of the long-forgotten Nike Dunk Low Plum. This dual-tone Dunk was just a little icing to the cake that was about to be served to the sneakerheads

Without a doubt, the 8th of February was without a doubt one of the most significant dates in the sneaker calendar. With not one but two absolute gems in their own leagues dropping on the SNKRS app. Firstly, the Air Jordan 1 Hi 85 Varsity Red better known as the “Reverse Bred’s” was released worldwide. This drop, in its own way, was highly significant to the Indian sneakerheads as we experienced the longest ever sneaker camp-out, held at Veg Non-Veg, Delhi.

The other big name that dropped on the same day was the StrangeLove X Nike SB Dunk Low “Valentine’s Day”. This is an absolute gem of SB Dunk indulged in various shades of pink and velvet material to produce one of the most limited Dunks in 2020.

This day was also a big one for Adidas and Kanye West as the first ever Adidas Yeezy Boost 700 MNVN were put on retail in the subtle “Triple Black” colorway.

Moving on to general releases, the Jordan brand released the Air Jordan 1 Retro High OG WMNS “UNC To Chicago” on 13th of February. This sneaker was inspired by two of the most significant colour schemes in the history of sneakers. Although some people did not approve of the fabric, this sneaker was an instant hit amongst people from both the genders.

Heating things up yet again, Virgil Abloh’s take on the Air Jordan 5 was undoubtedly a perfect candidate for sneaker of the year 2020. The Off-White X Air Jordan 5 Black was a sensation among sneakerheads from all across the globe.

Saving the best for the last yet again, the Air Jordan 3 SE Red-Cement Chicago All-Star was one slept on general release but it was surely worth a cop for people who follow hot-red sneakers. This iconic general release hit the Indian shelves a bit late in the month of May via Veg NonVeg and SuperKicks along with selected Nike stores across India.

As the month came to an end, the much awaited Travis Scott X Nike SB Dunk Low, were released on the very last day of February. The ecstatic pair of Nike SB Dunk Lows inspired by a Travis theme bandana could never go wrong among the sneakerheads all over the globe. Selling out within an instance world-wide. The resell value of this sneaker happily sits over the $1500 mark.

One of the most significant month for the sneaker world was brought to an end with a much loved general release. The Air Jordan 1 High OG “Pine Green” , with the fans seeking interest in the dual tone green-black color scheme, some questions were still being put forward about the quality of the leather.

We also saw these immensely beautiful kicks hit the websites in the month of February.

With loads of heat dropped in the month of February, we moved further towards a rather exciting month of March.