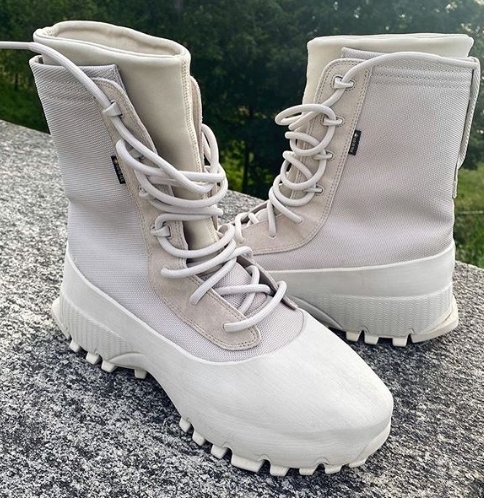 Kanye West is notably the most divergent designers when it comes to his style statement and the latest pieces from his collection do the talking. The Yeezy Season 8 had many different things cooking up ,with their new boots which resembled a spaceship which were totally bonkers.

The latest ureleased sample version of Yeezy 1050 is in the news and fans are a bit skeptical about this shoe. Originally the colorway of the boot is “SONG OF ASH” which is a sort of bone white colorway.

Kanye has introduced us to so many different colours which no one would have imagined of.

The upper of the Yeezy 1050 is sort of mesh on the outside and an inside layer has somewhat a leather-y touch to it. The upper is infused with GORE-TEX tech which is featured in a small tab resting around the ankle area. The tonal suedes on the lace eyelets give the shoe a rugged feel. The massive pull tab on the back of the shoe with zebra detailing on it gives the shoe a classic touch and to add it up

rope laces on this pair just enhances the overall look.

The chunky midsole of the shoe is probably the ugliest part of the shoe and certainly is an attention seeker. The chunky midsole wraps around the toebox in continuous manner which gives the shoe a well constructed look. Last but not the least Kanye provides his fans with the most treaded outsoles in the world. With these outsoles , climbing a mountain should be a rookie task.

Well no release dates have been pushed for these unreleased samples but certainly these are one of the most rare sneakers out there and is a collector’s special series.

Top 20 Facts About Nike Foamposite Which You Probably Didn't Know

The Nike KD 13 “Bred” is releasing next week, with a backward swoosh