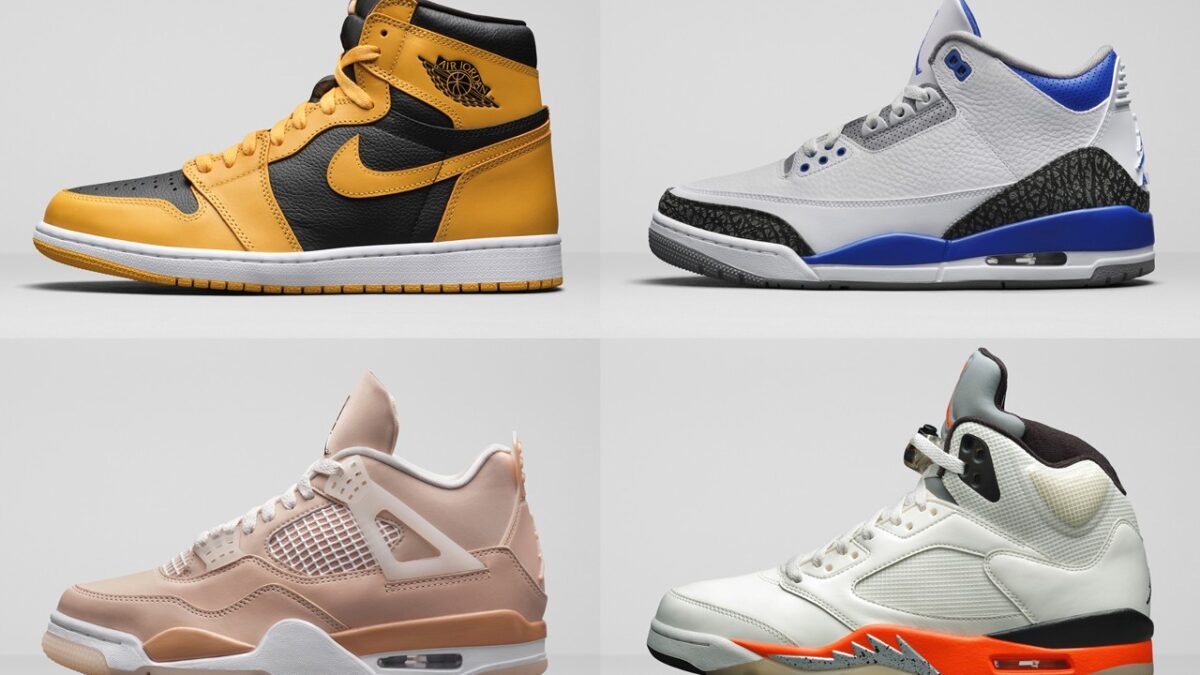 Jordan Brand’s retro lineup for Fall 2021 had officially landed. After delivering a successful set of Spring offerings, MJ’s popular sportswear imprint is now ready with 14 new iterations to surface in the market, majority of them being modernized variations of iconic silhouettes such as the Air Jordan 1, Air Jordan 4, Air Jordan 5 and more, while one of it is a resurrected piece from 1996 — the Air Jordan 11 Low IE.

Air Jordan 1 is not here to slow down for a long time, and that will be persistent for the Fall as well with four new versions scheduled to release. First of the kin is the “Pollen” edition that has an upper half alternating between yellow and black smooth leathers reminiscing the highly regarded “Wu Tang” Dunks. Next is the “Electro Orange” pair, a triple toned edition that boasts white, black and orange color-blocking that instantly reminds one of the Jordan 1‘s famed “Shattered Backboard” lineage. Other iterations in the capsule comprise of the Air Jordan 1 High “Seafoam” for the ladies and a new iteration that has a perforated collar which allows wearers to switch the shoe from a high-top to a low top.

The Air Jordan 3, Air Jordan 4, Air Jordan 5 and Air Jordan 6 each mark their territory in the new capsule. For the AJ3, a “Racer Blue” colorway accompanied with a classical cement print and Jumpman-branded heels is on its way for the market. An Air Jordan 4 that’s made for the ladies and inspired by the various shades of makeup is included in the mix. The branding details are featured on the tongues which are electroplated and justify the mirrors present in makeup palettes. The Air Jordan 5 in this group hones in on remixing the shoe’s traditional uppers. Leather overlays and reflective tongues are retained, but the kicks’ shoe’s collar, quarter panel and tongue bottoms are now lined with a textile mesh. With the ongoing 30th year anniversary of the Air Jordan 6, the brand has decided upon launching two more iterations for sneaker aficionados across the world. The first is a darker-toned variant that is heavily influenced by iconic Air Jordan 7 “Bordeaux”, while the second ladies-focused option is inspired by gilded earrings and comes packaged with golden hoops on the shoe’s lace toggles.

Coming to the last pack of iterations, the Air Jordan 11 Low IE makes a glorious return, and modern interpretations of the Air Jordan 12, 13 and 14 are set to drop. The former is a call back to the 1996 playoffs and arrives in its authentic black and red schemes. A duo of Air Jordan 12s are involved, the first dubbed in a muted palette and NikeGrind outsoles while the other in sports classic Bulls colors with smooth white leather uppers and “Metallic Red”. The Air Jordan 13 that’s is constructed in OG materials of leather uppers and textile tongue bottoms, and arrives with a familiar “Obsidian” theme. Last but not least, an Air Jordan 14 Low IE that is devised with a lipstick-like aesthetic has also been included. Black leather and mesh uppers are complemented by bold red collars and throats to mimic that cosmetic effect.

Jordan Brand’s Fall 2021 retro collection will begin dropping out on Nike SNKRS and at retailers like Foot Locker in the coming months. Specific launch dates have not been confirmed as of yet. Grab a look at all the kicks, discussed above.

These YEEZY SLIDES are all set to drop on the 21st of June!

The New Balance 1600 debuts in a fresh Beige colorway