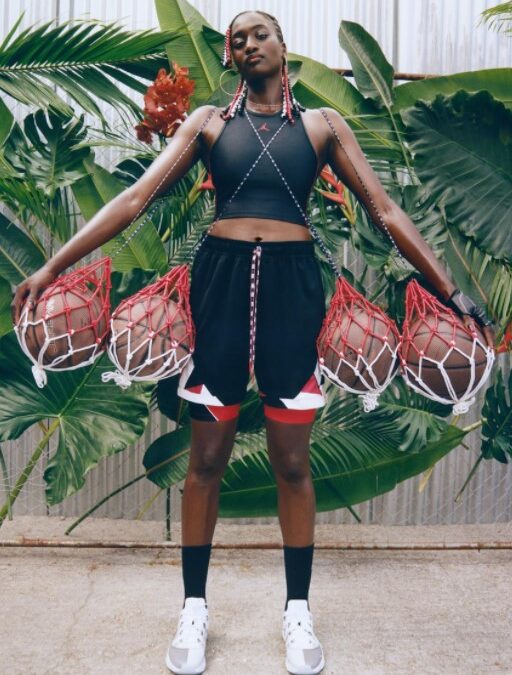 The cancellation of the 2020’s Quai 54 tournament due to COVID-19 was followed by the Jordan Brand and the famed Parisian basketball organization to comeback with a big 2021 collection. Resonating with France’s basketball culture, the collection features new takes on the Air Jordan 5, the Air Jordan 1 Low and the Air Jordan 35 Low along with a full capsule of apparel, with every piece utilizing the Quai 54’s stylized geometric logo. With the Tokyo Olympic Games on the horizon, the Jumpman has also created uniforms for the men’s and women’s French national basketball teams.

Red, white and black form the majority of the capsule covering footwear and apparel alike. Each Quai 54 x Jordan Brand collection focuses on its own unique pattern and for this year’s collection its inspiration is Paris’ West African community. “This year, we created a Quai 54 graphic motif inspired by traditional West African fabric patterns,” says Thibaut de Longeville, co-founder of Quai 54. “We wanted to modernize the look, add some Parisian flair, and ultimately match the energy of the event and its incredible community.”

France’s national team uniforms incorporate the colours of the country’s flag — blue, white and red which are accompanied by their own apparel collection. “Playing for our country under the legacy of Jordan Brand is special,” states Marine Johannès, guard for the French Women’s National Team. “We can’t wait to wear the new jersey and let the colors of France shine.”

Jordan Brand’s 2021 Quai 54 collection will be available to shop via the Nike Paris House of Innovation on July 8, then on the Nike’s webstore globally on July 10.