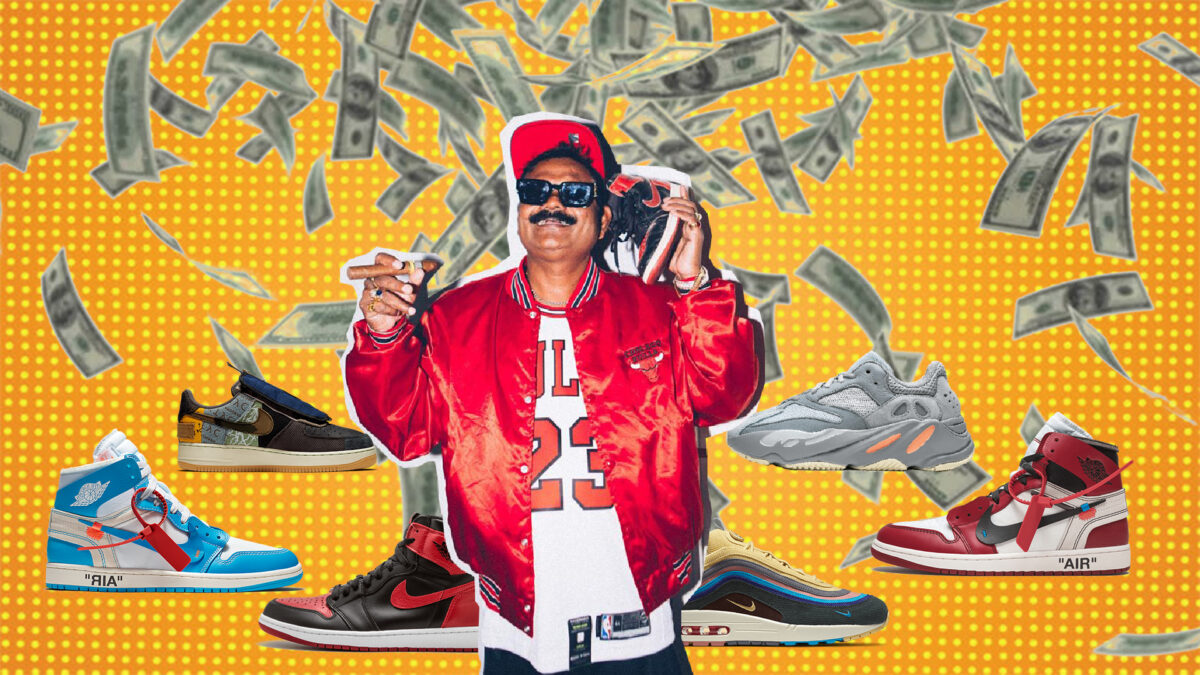 Just Sul, another simple ex-Indian engineer, has made a name for himself on Instagram due to his hilarious personality and antiques. He had moved to Zambia in the past to work as an engineer out of necessity but now he enjoys his time in Dubai owing to the wealth that he has accumulated as an influencer. The viral star is famous for his witty humor with a pinch of his Indian accent to it. Who knew this could make a career which could pay you such a handsome amount?

Ever since he posted his first video “When the waiter comes with your food” which got 14 Million views he became a social media influencer. The guy has a following of whooping 5.8 Million followers on Instagram. His followers include huge celebrities from Bollywood to Hollywood and multiple NBA stars like Luka Doncic and DJs like Martin Garrix too.

Not only is he a big personality portrayed as a living meme, but also a massive sneakerhead. Just Sul has even partnered with Stadium Goods to give away hyped-up sneakers a couple of times.

He owns a good collection of sneakers ranging from Louboutins to Nike Off white Chicagos. Given below is a list of a few of his hyped sneakers:

Two months later Kanye dropped the Pirate black version of the Yeezy V1s too on August 22 ,2015.

The Yeezy Boost 350 V2 ‘Beluga 2.0’ dropped on November 25, 2017. The shoe features a muted grey stripe on the laterals instead of the bright orange stripe found on the original ‘Beluga’ sneaker.

This retro helped fulfill Kanye West’s oft-repeated ‘YEEZYs for everyone’ Twitter mantra, as adidas organized the biggest drop in Yeezy history by promising pre-sale to anyone who signed up on the website. Similar to the first release, the ‘Triple White’ 2018 model features a Primeknit upper, a Boost midsole and custom adidas and Yeezy co-branding on the insole.

Created by designer Virgil Abloh, the Air Jordan 1 x OFF-WHITE comes in the classic Chicago colorway. Some of the sneakers’ half-finished features include a Swoosh connected to the shoe with visible blue stitching, ‘Air’ printed on the midsole, and an OFF-WHITE zip tie on the collar.

Designed for skaters, the Old Skool was initially known as the Style 36 before its rebranding as the Old Skool. This OG Vans Vault version features a black canvas upper supported by a padded collar, while a white leather jazz-stripe and white stitching contrast the look.

Jordan Brand has given the look to an all-leather silhouette that’s ready for just about any occasion. This iteration is equipped with smooth and tumbled leather for a durable build. Black covers the entire sneaker’s upper while tonal black accents fall every way you look.

The Desert Rat features a blend of retro and modern, with a chunky Feet You Wear sole unit from the adidas archives and a high-fashion influenced new design up top built in mesh and premium suede. The adidas Yeezy 500 Desert Rat “Blush” is available here in a clean, minimalist look of tonal light tan from top to bottom—a hue on par with much of Kanye’s Yeezy fashion line.

Virgil Abloh’s iteration of Air Jordan 1 were the most hyped sneakers when they released and continue their legacy till date. The UNC colorway and EU exclusive colorway feature the same deconstructed look with usual ofd white text on mid panel and a staple ziptie.

Off white prestos from Virgil’s collection is also the a grail in OG colorway and is one of the most confortable shoe from “The Ten” collection.

The vibrant colorway ensures that this Off-White x Nike Air Force 1 Low “Volt” stands out in its own way from the many Abloh-designed Nike models of 2018, and will remain one of the most memorable offerings from the ongoing collaboration for years to come.

The low-top Louis Junior is a core design in the Christian Louboutin sneaker edit, and this season, Louis Junior Spikes sees a black Veau Velours version decorated with the designer’s rock n’ roll fancy—tone-on-tone signature spikes at the toecap.

This drop sees the design dressed in textured velvet with overlays of suede. Permeated with pastel, the makeup blends seductive shades of soft pink with hits of Bright Melon and Gym Red. StrangeLove literally leaves its mark with embroidered skull illustrations on each heel.

Originally unveiled in 2001 as part of the ‘Ugly Duckling’ pack, this rare colourway is one of the most celebrated Dunks of the early noughties. While the ‘Plum’ make-up did return to shelves in high-top SB form in 2011, this release sees the low-top edition resurface for the first time since its ’01 debut. In the mould of the OG, this iteration arrives bathed in premium suede and multiple shades of purple.

Cactus Jack Nike collection is the most elegant sneaker collab by any brand. Travis Scott is making it big with his earthy neutral shoe colorways . We all know his love for Brown color and so does it reflect in his sneakers. The AJ1 with reverse nike swoosh and brown palettes across the shoe make it stand out.

The Cactus Jack AJ6 with military Green colorway and a hidden pocket for mysterious reasons near toe box give it a unique look. The AF1 from cactus jack collection displays unique mix of yellow , brown colorways and give a whole new look to the OG AF1.

Despite the fact that he is such a big meme figure, he is a hypebeast who has pairs that most people could only dream of.