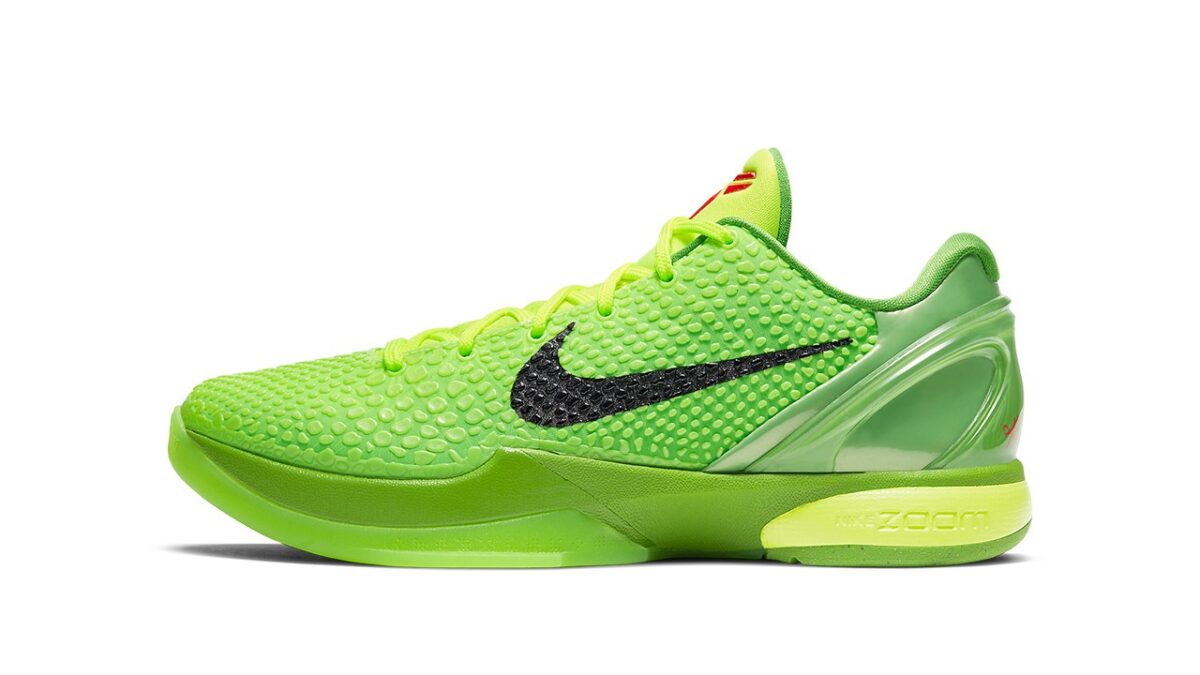 The most sought after pair released by Kobe Bryant‘s basketball sneaker profile, the Nike Kobe 6 “Grinch” is slated to resurface in Proto form. The official images have arrived early after Nike’s hoops family dropped the Kobe 5 Protro “Bruce Lee” installments.

For those who’ve had the privilege to witness Bryant construct his magnificent 20-year on treacherous trail, there’s a good chance that you’ve already seen holiday-themed kicks, but let’s delve into the design aspects for the amateurs. For context, this extra vibrant offering was the pair that Kobe rocked on Christmas Day back in 2010 when the Lakers sailed out against then-stacked Miami Heat clan with Le Bron James, Dwyde Wade, Chris Bosh and lads. Its colour draws from one of the authentic Dr. Seuss Story line known to-date, and translates the fictional antagonist’s furry body to a tee. The court-ready sneakers are predominantly green hued, and feature “Green Apple” shades that masks flaky uppers, heel molds, sock liners and majority of the midsoles. Accompanying this are “Volt” notes which douse the throat and lower rear’s Zoom bag, Santa themed outfit red hits that peak out through Kobe’s signature on the heel and atop the Mamba tongue insignias. The insoles divides “I want a Shoe That Molds to My Foot” wording between each foot, and will come packaged with a duo of laces to choose from. Nike has assured that the pair will be dropped across north America on December 24.

Strong With the Force, This ‘Star Wars’ X Adidas UltraBOOST “Yoda” Is