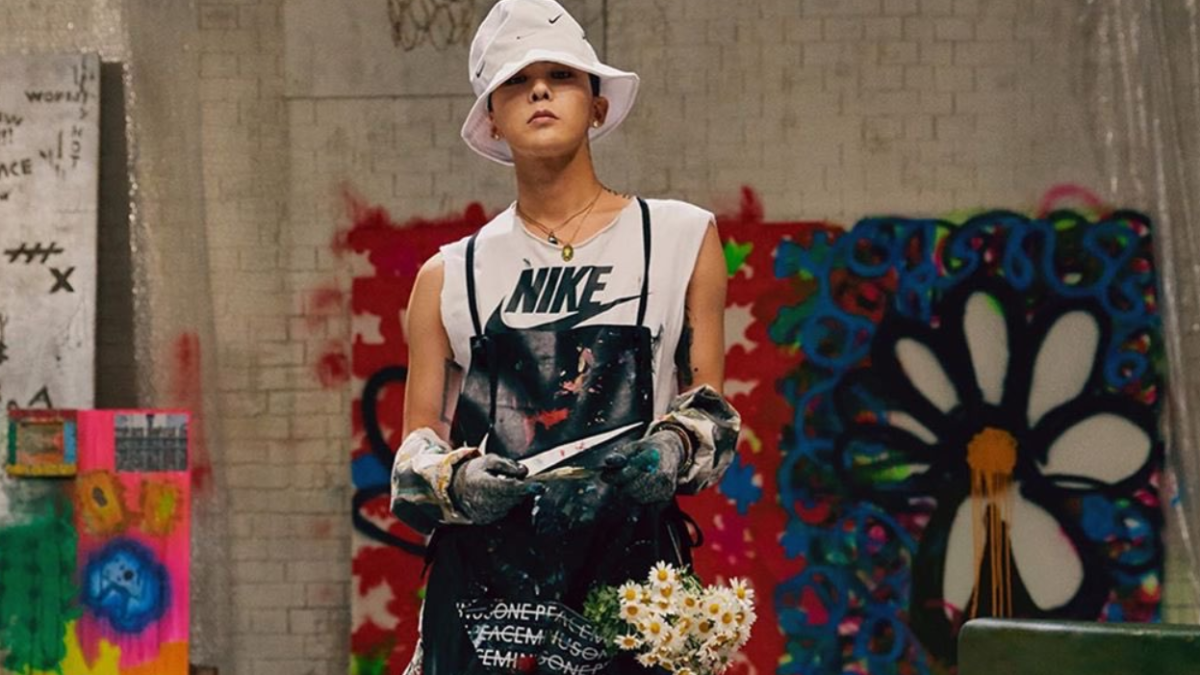 G-DRAGON has made Air Force 1 an integral part of the outfit, evolving as a star and blossoming into a global sensation. With a special upper construction that features a black painted overlay built to slowly strip away overtime to expose a personal artwork crafted by G-DRAGON, the Nike Air Force 1 ‘Para-noise’ represents this openly.

A dedicated emblem that incorporates Fila’s famous ‘F’ logo with the official BTS logo is illustrated by half of the set, and each ‘DNA’ and ‘IDOL’ song is embodied as a point sign.

Each item from this official set will have an official BTS gate logo on the product with a sticker or hangtag. In addition, any product in this series will be given an official hologram mark, which approves that it is an officially approved product. Fila has also collaborated with BTS For voyager collection as well in the past, being “Love Yourself” not the first collaboration of BTS with FILA.

Recently this collection was launched in India and you can cop it on VegnonVeg, Superkicks, and FilaIn.

A remix of Puma’s Turin footwear as well as sportswear fundamentals are included in the Puma x BTS collection.

Since they signed up with Puma in 2015, the seven-member BTS has been collaborating up brand partnerships and launches. BTS being the newest global brand ambassadors, joining an outstanding list already including Rihanna, Selena Gomez, and The Weeknd, recently confirmed by Puma. In the newest Puma Sportstyle ad, modeling Puma staples like the Puma Suede and T-7 Track Pants, the band was featuring.

The project started in 2017 when, as a brand director, New York, and L.A.-based fashion editor and stylist Danyl Geneciran came to Privé; instead of seeking a popular face to automatically support the garments, he needed a real partner.

He collaborated closely with SM Entertainment, the Korean entertainment corporation that oversees EXO, during his tenure as a fashion editor for L’Officiel, he thought to hit them (admittedly, even imagining Baekhyun’s bandmate Chanyeol, a fan of vocal fashion); they responded immediately and recommended Baekhyun, now co-creative director of Privé.

Singer and celebrity Kevin Woo stated in 2017 that he was launching a clothing collection for charity!

He said he needed to show a good outlook because of the hate going on all over the world. Kevin partnered up with a business named Represent that aims to create clothing for a cause including actors and other prominent individuals.

Fendi teamed up with K-pop singer Taeyang from the Big Bang party to launch an exclusive “Fendi for TaeYang” capsule set.

Designer Silvia Venturini Fendi and the Men’s Studio of the label partnered with the South Korean singer to develop a series of tops, hoodies, T-shirts, and accessories, revisiting the fall line of the brand with the trademark elements of the rapper, such as daisy-shaped motifs.

Reinventions of classics, such as a trench coat with prints of Wu’s tattoos, and other new designs are included in the exclusive pieces, individually curated by artistic director Christopher Bailey and Wu.

Wu’s imagination is expressed in the set, with his works of art and song lyrics as well as his personal style. In Contemporary Stewart Royal tartan, some highlights include a biker jacket, printed retro check cotton oversized t-shirts, and an often-touch plastic cagoule.

RS (Running System) is resurrected as a future-oriented and advanced silhouette, based on the revolutionary cushion construction of the representative shoe line of Puma. RS 2.0 Reflective point information that shines even in the dark is added to the material.

There are two colors available, black and white, which can be worn every day. A logo symbolizing the partnership between Puma and Kang Daniel was also established. In specific, with a special sticker, Kang Daniel’s birthday and solo debut date have been included.

Seulgi was the first official female ambassador of CONVERSE Korea. No other female ambassador in the sector has been present since 2018, making Seulgi the first female one. Not to mention that she has already taken part in their projects before, such as the partnership of “Fear of Heaven” and “One Star Ox.”

The member of Red Velvet further develops her presence in the film industry when she lands a spot in Converse’s advertisement featuring many “youth culture stars and talented musicians”!
The goal of “Keep On Loving What You Want” was to inspire young people to continue to follow their interests and to show society the young generation’s versatile possibilities and diverse personalities.

EXO was picked as the face for the new range of trendy sneakers from Skechers, D’Lites 2 back in 2016. Unfortunately, the members of EXO D.O. As models of Skechers, Lay, and Lay were not present due to overlapping schedules.

Skechers selected the group as the models for the company’s stylish, elegant, and fresh range of D-Lites 2 with EXO’s global presence and success.