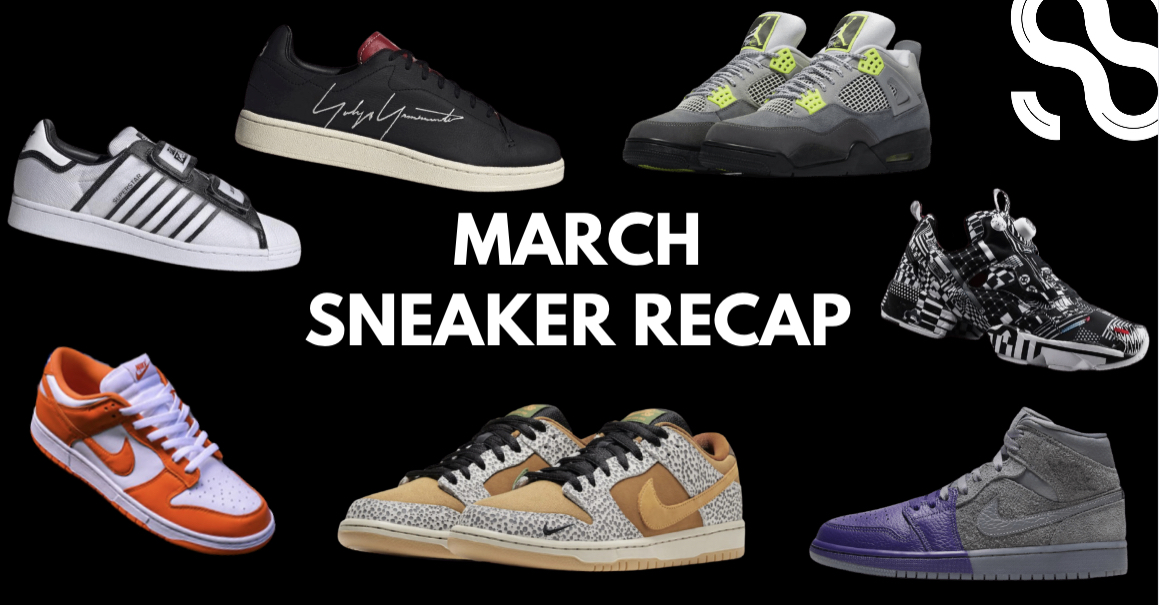 The sneaker moguls had to slow down a bit after an array of hyped releases in February. The month of March was also a great one with a lot of long-awaited kicks finally being released

The Jordan brand’s UNC colorways have always won the sneaker community’s hearts, so did this general release. The Air Jordan 3 UNC had a slower start as far as the resell segment is concerned, owing to the large quantities made available, but as we proceed further in 2020, we can clearly see this sneaker double its value over time.

Every month has its own special day. On 14th March there were four SNKRS app drops and a Yeezy dropping as well.

We might call this once-in-a-lifetime collaboration as we saw the American rap star Pusha T, the online gaming sensation video game “Call of Duty” and Adidas collaborating to give out Call Of Duty X Pusha T X Adidas Ozweego Black.

Fans might not have supported the Jordan brand in remaking the classic Air Jordan 1 Retro but this time around, this sneaker in itself was a wonderful piece of work put together by the Air Jordan team. With patent leather uppers and translucent, dual-tone soles, the Air Jordan 1 High Zoom Racer Blue wasn’t the one to sleep upon.

The Yeezy 350 v2 “Desert Sage” was just another Kanye’s textbook creative Yeezy idea. It might have had a topsy-turvy resell value but the bright orange accents caught a lot of big eyes in the sneaker community. They were the first Yeezy 350 v2 which weren’t made available in store but had to be bought on the Veg Non-Veg website.

Talking about dunks, the Nike Dunk Low Kentucky and the Nike Dunk Low Syracuse were inspired by the respective NCAA teams for the two. We saw them grow value slowly and since March, they have had a steady demand, pushing the price towards the upper $600 mark. These dual-chromatic iterations hit the feet perfectly.

Saving the best for the last yet again, Nike also re-released the Nike SB Dunk Low Safari, we saw many prominent hypebeasts go after this beautiful pair. The sneaker borrows the “safari” theme from the atmos x Nike Air Max 1 and features premium suede and mesh underlays.

To sum up, in the first quarter of 2020 we had two exciting drops on the 21st of March. First up was the Adidas Yeezy Boost 350 V2 Cinder. This subtle charcoal-coloured 350 v2 was a typical 350 v2 drop. This sneaker brought back darker shades of Kanye’s colour-palette.

Last but not the least, we were blessed with a precisely unique iteration of the fan-favourite Air Jordan 4 series. The Air Jordan 4 Neon, a general release featured a simple yet bold array of contrasting colourway. No one expected this to blow up the sneaker scene and can be found sitting on the shelves at the retail price. We saw this interesting Jordan 4 drop in India through selected Nike stores,

We also saw these beautiful sneakers go up on retail in the Month of March.

With this the month of March for the sneaker community came to end. Stay tuned to see what April had to offer with the start of a fresh quarter.

Street Sense teams up with Disarm Global to create their first capsule collection.