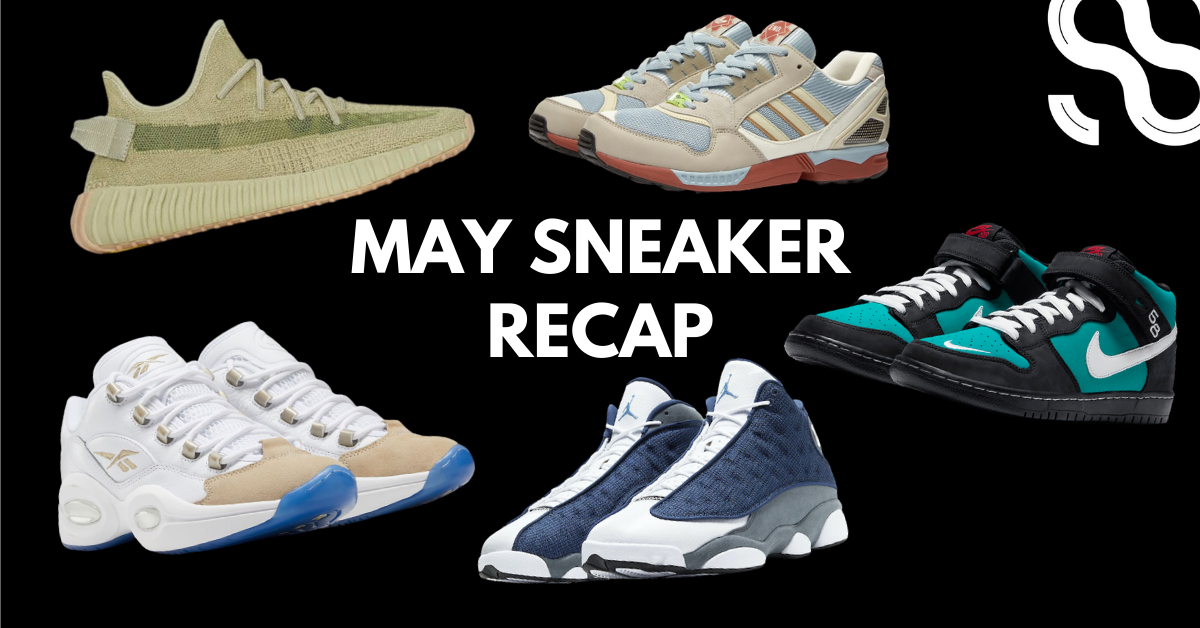 The month of May was the one to watch with absolute bangers dropping this month, we couldnt handle the heat wave that the month of May sent towards us.

Starting off the month was yet another general release in form of a true OG colorway. The Air Jordan 5 Fire Red 2020 was dropped in stores globally and in India at Super Kicks and both the VNV outlets. This release was particularly was quite famous here in India.

Moving on we had another 350 v2 from Kanye’s 2020 roster, the Adidas Yeezy Boost 350 V2 Sulfur. Just another typical Yeezy release worldwide, they were made available in India as well through Adidas Originals store in New Delhi.

Nike and SoleFly’s long term friendship was brought to a step higher with the SoleFly X Air Jordan 10. The subtle yet bold colorway was a worthy cop for all the OG Jordan fans.

Once again Jordan brand offered us a long-awaited general release, available across the globe on the Nike SNKRS app and at selected Indian websites such as Veg Non-Veg and SuperKicks, the Air Jordan 1 High OG Royal Toe had attracted tons of eyes from the sneakerhead community. Inspired from the OG royal blue color scheme, this sneaker was a must cop.

With this sneaker, Kanye and Adidas made it straightforward that they have a long way to go on together. This basketball sneaker was a must cop for any Kanye and Adidas fan. With some people calling it weird and an uncomfortable sneaker, the sales for the Adidas Yeezy Quantum made it clear that it will be dominating the sneaker gaming further on. They were dropped on the annual NBA all-star weekend which is known for putting forward great sneakers.

Even Nike decided to drop some fresh LeBron’s on the all-star weekend. The Nike LeBron 7 Lakers Media Day taking the LBJ fans by a wave. This performance basketball sneaker is dubbed to be one of LeBron’s favorite signature shoe ever made.

Moving towards the final 3 most hyped kicks which brought the month of May towards the end. The Nike Dunk Low SP Brazil inspired by the Brazillian national football team jersey was re-released. It was officially released by Nike six years ago before the 2014 FIFA World Cup in Brazil. This was an absolute hit among the Dunk fans and instantly sold out on the Nike SNKRS app.

In the mid-2019, Travis Scott teased his up and coming collabs with sneaker moguls Nike, including the Travis Scott X Nike Air Max 270 React Cactus Trails. These Cactus Jack inspired Air Max’s blew the hypebeasts’ minds and shook the sneakerhead community. Exclusively available on the SNKRS app for almost every Travis fan.

With the month of May summed up by any hypebeast’s dream sneaker, we went forward to the month of June for more pleasent surprises.

Make sure to check out these fresh kicks which also made an appearance on the market in the month of May.

That’s all for May, make sure you stay tuned to find out what the month June had to offer us.