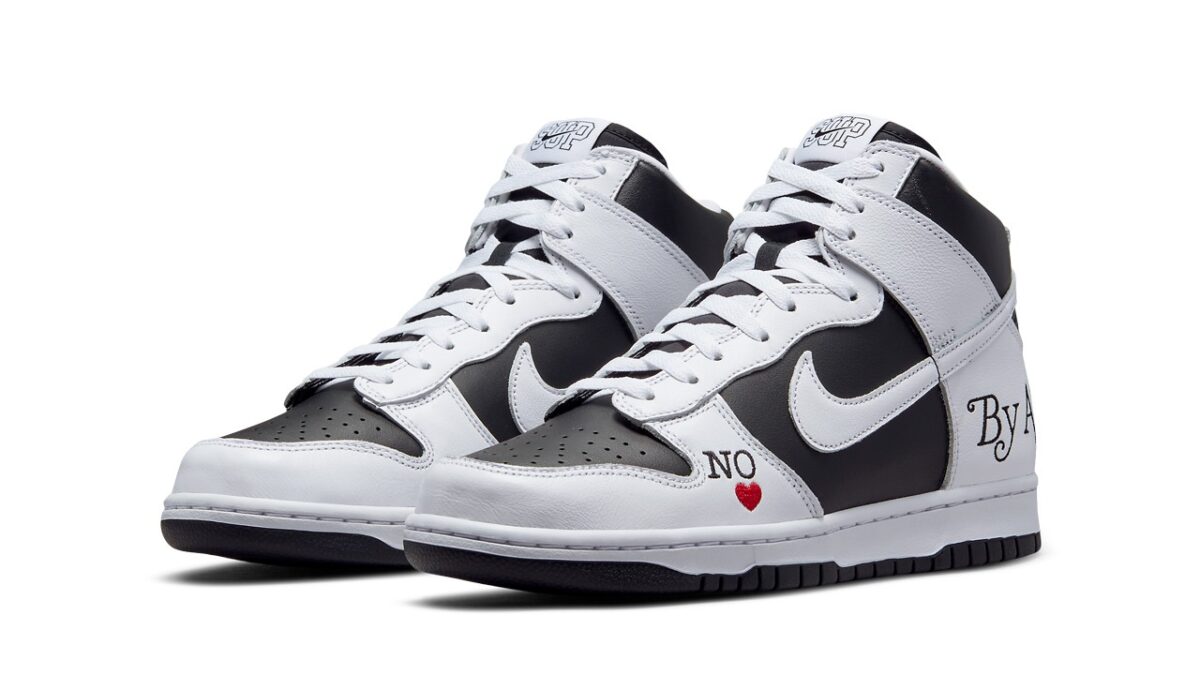 Supreme X Nike SB Dunk High “By Any Means” is considered to be one of the most highly celebrated releases of the Fall and just before its release we have some new images of the “Black/White” colorway. This collab marks Supreme’s second SB Dunk High collaboration with Nike SB followed by the iconic set of star-covered SB Dunk Highs that released back in the year 2003. The “By Any Means” comes with a classic two-tone color blocking and plenty of special branding hits overall.

Though this high-cut Dunk is an SB, its looks slightly hint towards Nike Sportswear. The toeboxes, quarters, and collars come in black leather while the mudguards, eyestays heel, collar flaps, and Swooshes have white leather. A prominent branding features on the lateral forefoot with a “No<3” graphic, a flip on Milton Gloser’s famed “1<3 New York” design. It also has a hybrid “SUP” on the tongue, inspired by the Nike NYC logo. The heels of the shoe have the boldest embellishment, with a “By Any Means” graphic that combines New York Magazine’s following font with a different iteration on the John Jay–designed Nike NYC graphic. On the heel tab, there’s a subtle embroidery of “Supreme Team” while the red insoles have a cut-off “SUP” graphic. White midsoles and black outsoles complete the look.

The release date is yet to be disclosed for the Supreme X Nike SB Dunks High “By Any Means”. But the sudden release of new images hints that the silhouette may be releasing in the coming weeks. Following the release pattern between Supreme x Nike collabs, they’ll release the pairs on the Supreme webstore first and then on Nike SNKRS a week or two later.

Nike Only Made 25 Pairs of These Exclusive Air Force 1s

Anime Inspired Sneakers | The Best of them all