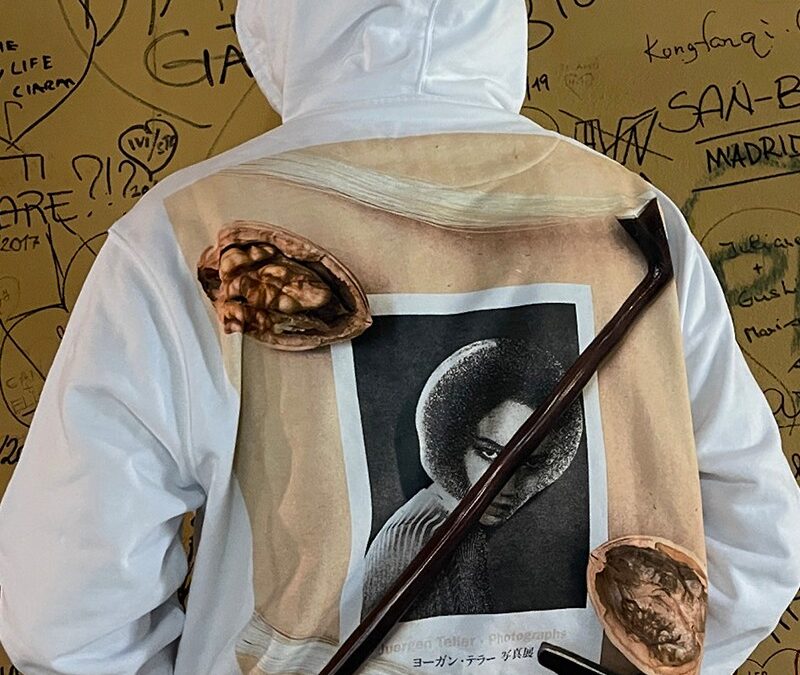 For its new capsule collection, Palace has decided to collaborate with one of the world’s finest photographers in the art and fashion space, Juergen Teller. The collection involves hoodies, t-shirts, a dress shirt, a tote and, true to the British skate brand, skateboards.

Teller has been teaming up with Palace since 2018, to shoot for their skate team’s campaigns and lookbooks in locations spanning London, Palm Springs, Tokyo and Kentucky. Regarding this project the German photographer chose to indulge in both of his new work and his archive of photos that captures work from his debut in the late 1980s to the present day.

In one of the images embossed on on a button-down dress shirt, a lifeless dog Teller found frozen in a trash bin in Czechoslovakia has been pictured, having travelled back to his father’s hometown after his passing. Another one of his pictures, reflecting his classic perverse style, covers a hoodie with magnified cigarette butts, all of which were smoked by Norwegian novelist Karl Ove Knausgård.

When it comes to the recent works, Teller’s inspiration from the constraint of resources during lockdown forced him to get outside of the box which resulted in two collages, printed on a hoodie and a skateboard.

One can shop the collection from July 9, 11am BST/11am EDT onwards at the the Palace store online and at Palace Shops in London, NYC, Los Angeles, as well as at Dover Street Market in London and Los Angeles, followed by its Tokyo and China “Palace_Skateboards” WeChat releases at 11am JST/CST respectively on July 10. A limited-edition newspaper featuring the lookbook shot by Teller will be gifted with every purchase in store.