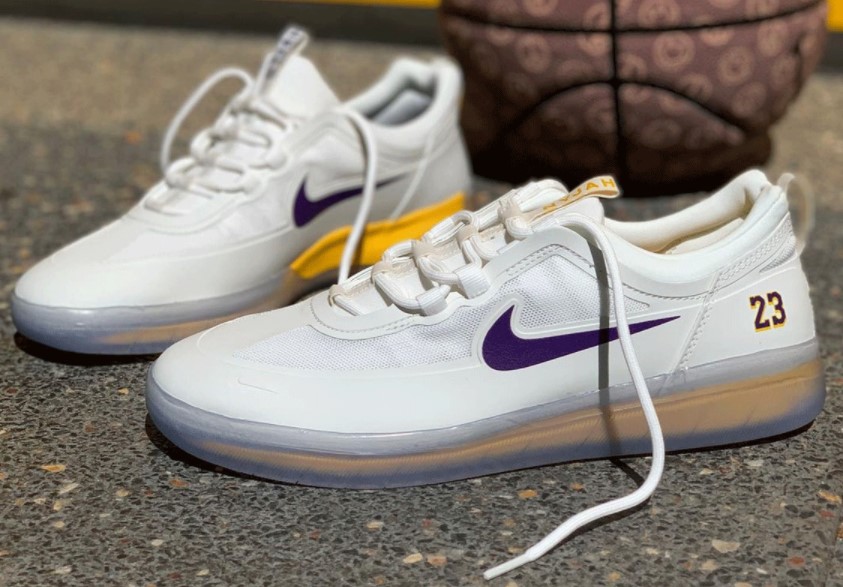 Although Nyjah Huston was not able to compete in the Tokyo Olympics as the events have been postponed, the 29-year-old professional skater has rewarded a feat only a select few have received – his second signature sneaker with Nike SB. And for preparation of its latest colorway, the Nyjah Free 2 looks to the Los Angeles Lakers’ famous palette in collaboration with the NBA.

This colorway boasts a predominantly off-white upper, inspired by the Nike Zoom Spiridon upper, with hints of “Court Purple” and “University Gold” across its accents. The “23” logo embroidered on the lateral heel, nods to LeBron James’ jersey number, are outlined in the eye-catching latter, as the profile swooshes indulge in the former tone. The California-native’s first name alternates between both hues via its appearance on the tongue pull tabs, whereas partially- exposed midsole tooling boasts the yellow-adjacent color. A semi-translucent blue arrangement makes up the remaining midsole and outsole component, differing from other Lakers-commemorating options from NIKE, Inc. in 2020.

Enjoy a first look at the shoes here below, and expect pairs to hit Nike.com for $95 USD soon.

Raekwon, Packer and Diadora Team Up For N.9000 "Only Built 4 Cuban Linx"