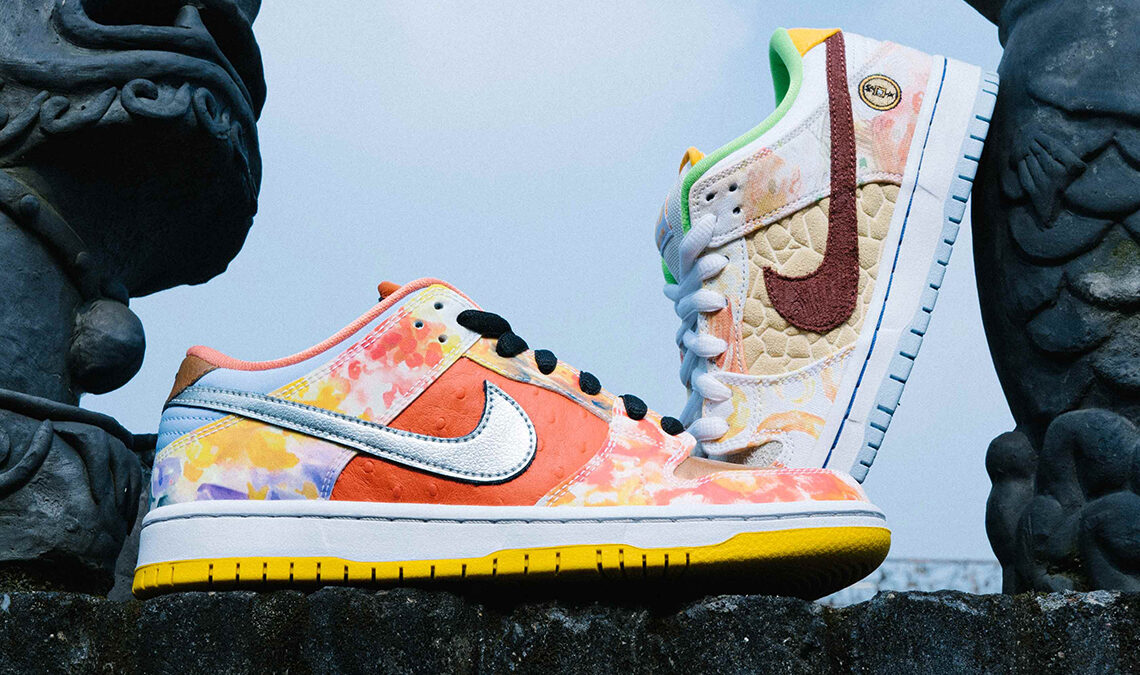 Nike SB is celebrating the bonding effect” that food culture has in China through a loud “What The” styled colorway. The Guangzhou based artist behind this sneaker, Jason Deng, emulates this through a watercolor medium, which depicts the six different regional dishes from six different cities.

The left shoe, a lighter beige is used to mirror that of three flour-based dishes, while the green suede of its toes liken to Douzhi, a green bean soup from Beijing. The overlays feature the donut patterns, the lateral appears like pita Bread , and watercolor patterns remind of mutton soup. More graphics are displayed over with Shanghai noodles and blue skies, both accented adjacent by chopstick swooshes and an insole luxurious in its porcelain motifs.

The right shoe is equally rich in the details with the metallic color the most instantly noticeable as it simulates Chengdu hotpots. The toebox shows the Boiling chili oil heats and the lateral placed ostrich leathers seem like crispy roasted goose skin, and the Swoosh nods to the metal hooks that hang said birds in butcher shops. Flames and lychee wood cook the aforementioned by way of the eyelets, shaved ice and taro balls entice the sweet tooth at the heel counter, and the insole paints a picturesque landscape on a bench terrace. The cooking oil outsoles feature meat-colored linings which round off the look.

The Nike SB Dunk Low “Street Hawker” will be releasing at skate shops on January 9th.

adidas Celebrates the History of Jacquard With ZX 5000 "Vieux Lyon"