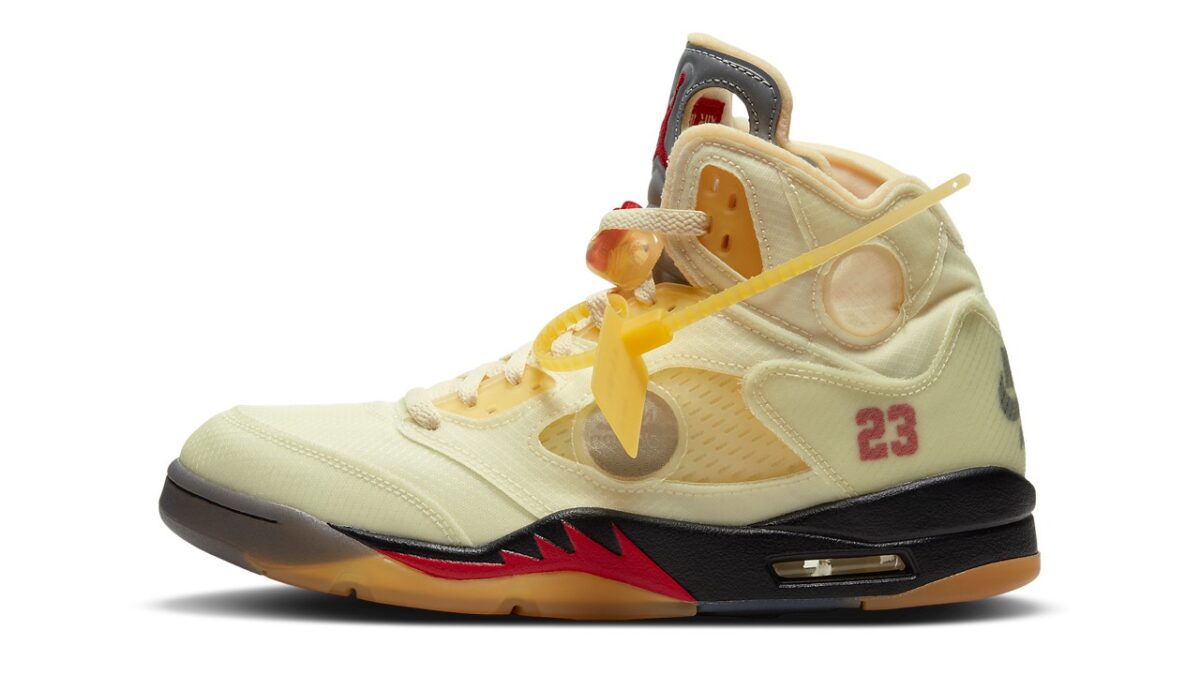 After being rumored for more than eight months now, Virgil Abloh and Jordan Brand‘s Off-White™ x Air Jordan 5 “Sail” has finally been showcased a set of formal images — a standard notification of an upcoming retail release.

A laid-back take on the OG Air Jordan 5 “Fire Red,” Abloh’s latest allied project is both past and future, mixing up aged patinas and classic colors with new-wave technical fabric.

Uppers are built almost completely of a light TPE. Along with the AJ5’s signature midfoot netting and large eye stays, this half-translucent synthetic is given an vintage yellow finish, one that’s similar in color to Nigel Sylvester’s infamous Air Jordan 1 sneaker from 2018. Signature “23” and “Nike Air” hits are seen on the heel, while the tongue is given its original metallic silver shade, embroidered red Jumpman design and lace toggle.

Abloh’s classic medial Helvetica text and lateral zip tie make a comeback as well, but the all the eyes are on the delicate TPE oval pieces, placed randomly on the collar, tongue and both quarter panels. Much like the Off-White™ x Air Jordan 5 “Black Metallic,” these holes can easily be removed with a razor blade for an topsy-turvy highlight of DIY customization. Jet black midsoles with the AJ5’s P-51 Mustang-like spike graphic and yellowed outsoles sum up the look.

But the drop date being October 24th has now been shifted and the pair is gonna land somewhere around the end of this year for $225 USD.