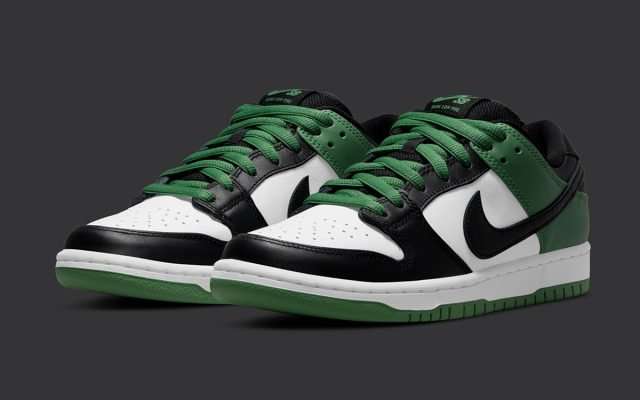 The Nike Dunk and especially its SB released have been honoring Air Jordans for a while now but lately we have seen the Air Jordan 1 honor its Peter Moore– designed counterpart with a bevy of Dunk-inspired colorways. Starting from the “Bio Hack” to the Air Jordan 1 Zoom “Brut” to the upcoming Goldenrod-like “Pollen” release, Jordan Brand is returning the favor after all. With Nike SB returning with another Black Toe-based banger, this time gearing up in “Classic green” it’s clear that its not a one-way street.

The pair dipped in true Black Toe style, trades the OG Air Jordan’s red for the designated color. Clean white uppers are overlaid with blacks at the toe, eyelets, Swooshes, and collar with pops of green appearing at the quarter and outsole. The pair features the same leather build as seen on the ultra-hyped Nike SB Dunk Low “Chicago”, and recently-released “Court Purple”

The pair has not achieved a release date yet although it is reportedly expected in Summer 2021.