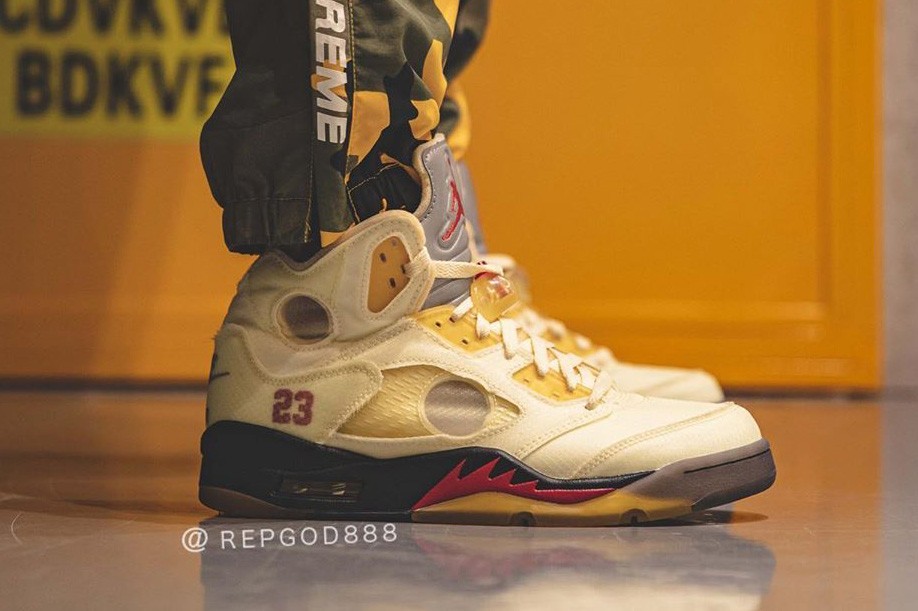 Virgil Abloh‘s Off-White™ x Air Jordan 5 “Sail” has been rumored since 5 months and its teased holiday season launch is still over 2 months away, but the prediction for the see-through Jordan Brand style is still high — and now we have been given with a much more detailed on and off foot images. Fundamentally a dismantled silhouette of the OG Air Jordan 5 “Fire Red,” Abloh and the Jumpman’s latest offers a stripped-back nylon look, an aged tint, and, of course, the signature “BRANDED” “DETAILS.”

Clicked with Supreme camo pants by the famous sneaker leaker repgod888, the aged look on the “Sail” pops in indisputable fashion, providing an artfully aged look. Signature zip ties match the yellowed tint of the midfoot netting, eye stays and outsole as well, while classic red and black midsoles give plenty of ’90s Michael Jordan vibes along with the heel’s Nike Air hit and lateral side’s #23 graphic.

Detail shots are available as well, giving a detailed look at the synthetic TPE built up and Abloh’s notable Helvetica branding on the medial quarter. Semi-translucent circles on quarter, heel, and tongue alike are the most notable tweak, providing an organized customization option for aspiring DIY artists.

The Off-White™ x Air Jordan 5 “Sail” will touch down at retailers later this year. MSRP will most probably be $225 USD, in line with the “Black Metallic” colorway that released at NBA All-Star Weekend in February.

Street Sense teams up with Disarm Global to create their first capsule collection.