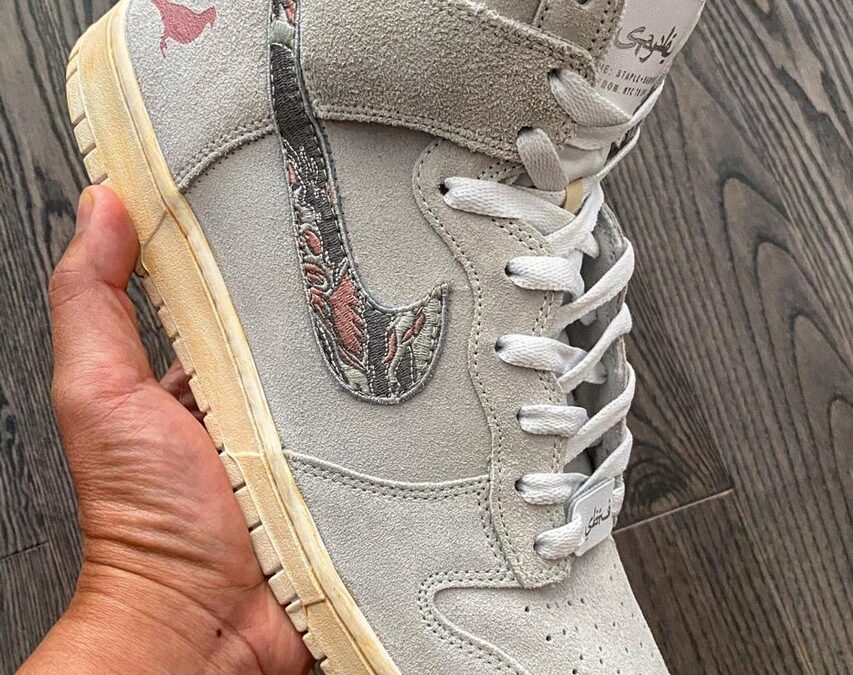 Staple and SBTG are continuing their collaborative streak with a new take on the Nike’s Dunk High named the “Pigeon Fury”. The pair is accompanied with masks, SBTG and Staple’s high cut dunk which will only be available via raffle and reveals similar motifs from both brands.

The uppers are built from supple gray suede, with a signature detail arriving via SBTG’s camouflage print on the lateral and medial Swooshes. Swooshes provide an attractive pop and they’re far from the only notable tweaks. Custom tongue badges and lace deubres combine SBTG and Staple branding, with heels split between Staple’s pigeon graphic on the right foot and SBTG’s Arabic spellout on the left foot — both done in orange-pink. Intentionally yellowed tongues and midsoles add to the vintage look of the shoe.The apparel section consists of the hoodie which arrives in black and places a large embroidered pigeon graphic on its chest, done up in SBTG’s camo pattern to match the shoes. Masks arrive in a two-pack of grey and pink with solid crossbones and camo outlines adding flair.

To get your hands on pair, raffle is free to enter at the Staple webstore, and you can gain another entry by purchasing a hoodie ($78 USD) or a mask pack ($35 USD). The contest runs until 3 P.M. EST on September 20, and winners will be allowed to purchase a pair for $1 USD. NTWRK will also be giving away a pair of shoes and a hoodie via a live drawing at 7 P.M. EST on the same day.