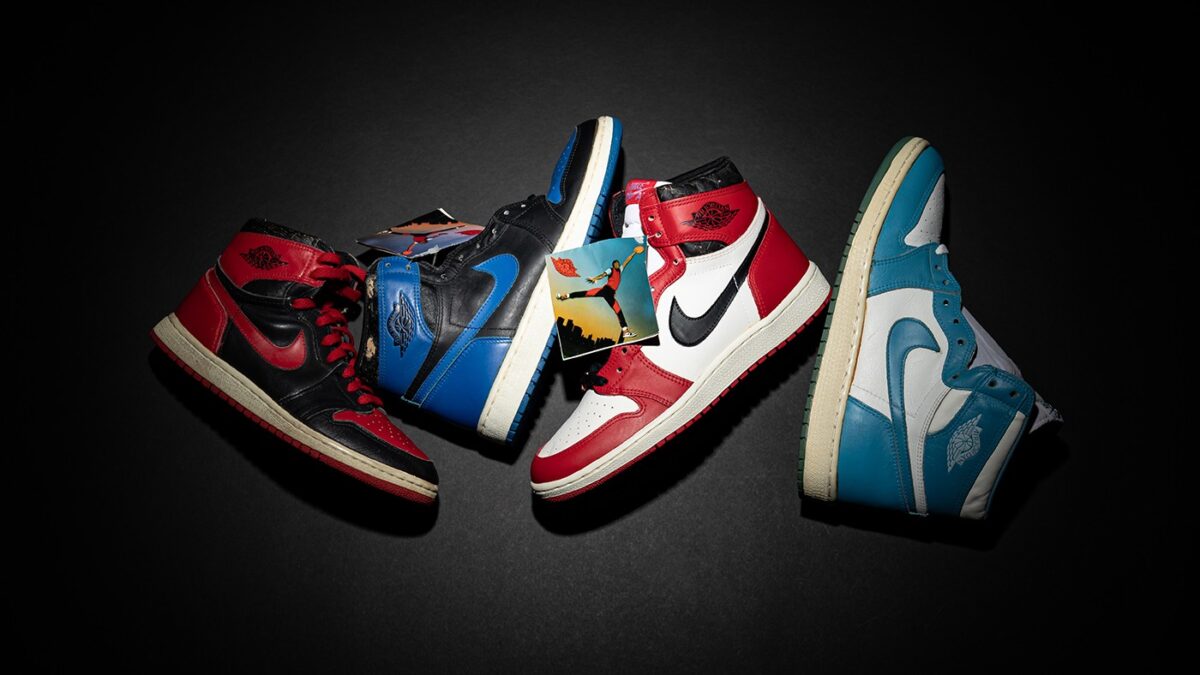 After a successful collaboration auction in 2020, Stadium Goods and Christie’s team up for the second auction, which is considered to be the largest online sneaker auction ever held at Christie’s entitled “Original Air Takes Flight: The Evolution and Influence of Air Jordan Sneakers.”

Michael Jordan enthusiasts can indulge themselves in the vast range of 90 sneakers including rare early samples, a complete set of Original Air Jordans 1-14, game-worn sneakers and Jordan-related articles from professional athletes and music artists such as Kobe Bryant, Lebron James, Derek Jeter, Drake, Eminem and more. The auction serves homage to the Jordan legacy through this colossal offering of historic footwear memorabilia.

The “Original Air Part II” begins with an assortment of early development prototypes and sample pairs, which are the significant commodities to the early stages of the Jordan brand. The one-of-a-kind 1985/86 Air Jordan 2 development sample and a salesman’s sample of the Air Jordan 1 Highs in the iconic “Bred” colorway are some of the highlights . Rare UNC, Michigan, Georgetown player exclusives and samples such as an early Air Jordan 1 model and an Air Jordan 22 are also included in the auction.

The Air Jordan 2 kicks were probably one of the very first versions of the second signature model and is considered as the only existing sample. In 1985 ,the Air Jordan 1 salesman’s sample was used by a Nike rep in order to promote the first-ever signature Jordan shoe . The production code notes to the number “84” which means that the kicks were manufactured in 1984 and “SS” in the end signifies a salesman sample item. Along with the rare pair comes a vintage Nike-branded briefcase believed to belong to an early Nike product specialist called “EKINs” (Nike spelled backward).

Some of the pairs which are included in the collection are exclusively worn by Jordan such as the Air Jordan 11 “Concord,” Air Jordan 12 “Taxi,” Air Jordan 13 “He Got Game” and Air Jordan 17. BJ Armstrong and Charles Barkley’s autographed and worn pairs along with items from other professional athletes namely Kobe Bryant, LeBron James, Derek Jeter, Russell Westbrook, Ray Allen and Jimmy Butler are incorporated into the mix.

Another set of highlights are sneaker samples from the Eminem and Drake Collab as well as highly coveted commemorative pairs such as the “Friends and Family” exclusive Air Jordan Kobe 3 + 8 Pack, Air Jordan 1 “Colette,” Air Jordan 16 “Veterans Day” and “Board of Governors” and an Air Jordan 7 “Hare” sample featuring rare crocodile-textured panels.

Early highlights from the “Original Air Part II” auction set for an online preview with a full sale live on Christie’s official website and viewing room beginning June 4. From June 4 to 9, the full selection will preview at Christie’s New York with additional viewings of select items from June 9 to 30. Biddings will start from June 22 until June 30.

The Adidas Yeezy 380 “Onyx” will release in November