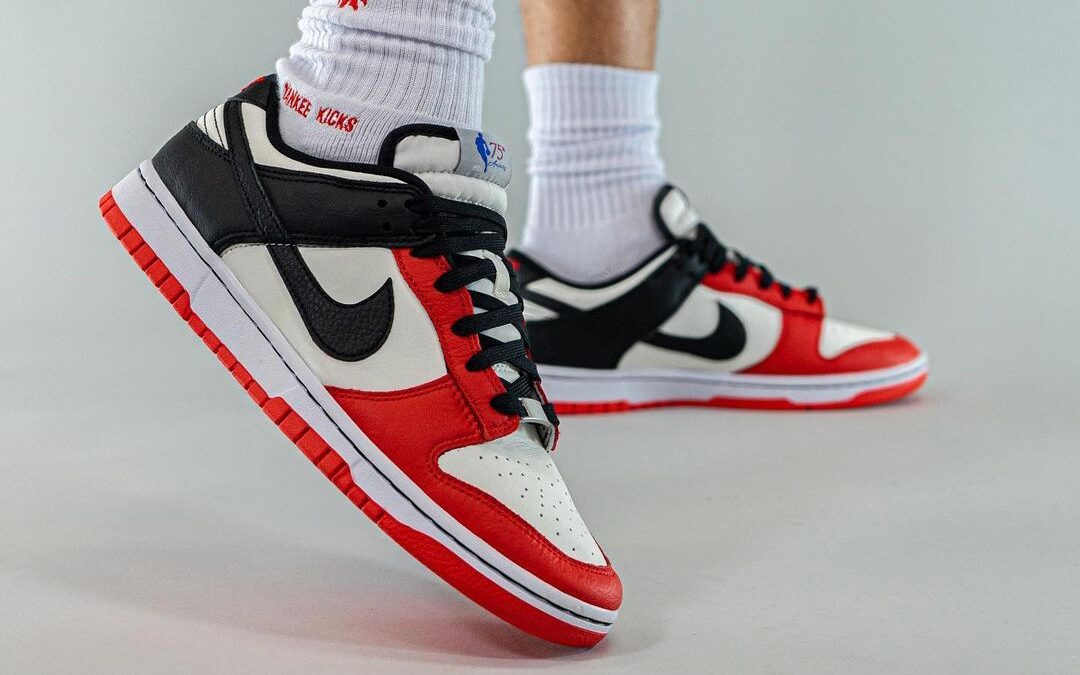 For its 75th anniversary celebration, the NBA in partnership with Nike curated a set of team-inspired Dunk Low iterations, and most recently the franchise to get in on the festivities is the Chicago Bulls. Being one of the league’s most popular organizations courtesy of icons like Michael Jordan, Scottie Pippen, and Derrick Rose, the Bulls’ fresh low-cut Dunk contributes to a pack with existing shoes that are inspired by the New York Knicks and Brooklyn Nets.

The sneaker leaker Yankee Kicks served us with a much more detailed look at its stylings of Bulls’ Air Jordan-esque Dunk even though it happens to be the first NBA x Nike Dunk Low to be revealed. Built entirely of leather, its upper features a color scheme that combines “Sail” toeboxes, quarter panels, and collars with signature “Chile Red” mudguards and eyestays. Black is introduced into the mix as well, appearing on heels, heel tabs, collar flaps, Swooshes, and laces.

Branding is done via two pieces: the sail-colored nylon tongue boasting a 75th anniversary NBA logo and the silver lace deubre featuring a laser-engraved diamond graphic. The iconic red Nike branding appears on the heel, and the upper is brought together both literally and figuratively by black laces. Completing the look down below are the white midsoles with black contrast stitching work with red outsoles

No official release date for the NBA x Nike Dunk Low EMB “Chicago Bulls” has been revealed yet, but early reports place suggest its arrival to be in October — right around the 2021-22 NBA season’s tip-off. The pair will be priced at $110 USD.