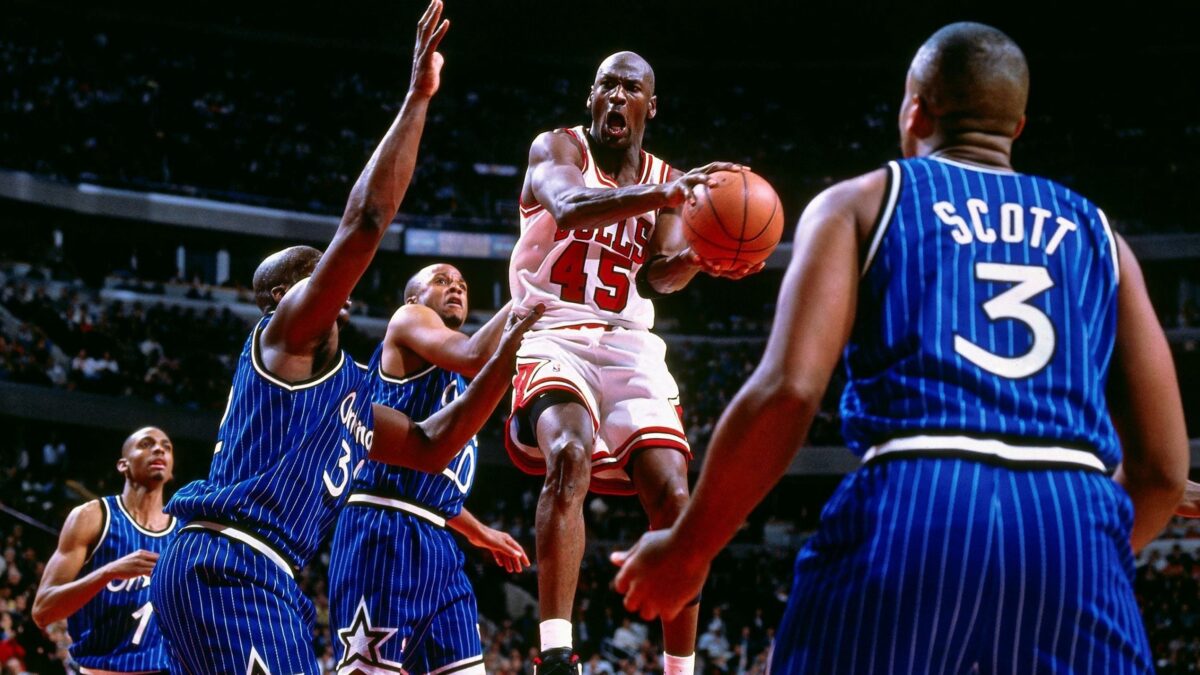 Netflix and ESPN’s 10 part documentary-series, The Last Dance, which focuses on the Chicago Bulls, and Michael Jordan, has now updated its list of fan favorite episodes, with the addition of episode 8. In the previous episode, we see a mentally exhausted and drained Jordan, who after losing his father to a robbery-gone-wrong, retires from basketball and starts playing baseball, something the father son duo often talked about doing.

We are first taken to 1998 Eastern Conference Finals, where the Bulls are playing the Charlotte Hornets, who try but could not successfully keep Michael under control. The Bulls won this game with a score of 83-70. In game 2 however, we see a confident BJ Armstrong, who says he has figured the Bulls out, and proves it, by giving the Hornets a five-point lead. Michael clearly was insulted a bit, and he says, “…BJ should know better. If you’re gonna high-five, talk trash, now I had a bone to pick with you.” He says that he was supposed to kill BJ, he was supposed to dominate BJ, and from that point he did. Mark Vancil, the author of Rare Air, said this about this moment, “That’s like throwing meat to a tiger.”

Another such incident is the 1993 game, which was in Chicago, on the 19th of March, when the Bulls played the Washington Bullets. A guard from Louisville, LaBradford Smith, scored 37 points against Jordan. LaBradford was the rookie draft for that year, and supposedly, while walking out of the gym, LaBradford had said, “Nice game, Mike”. This made Jordan furious. The next day, they played in Washington. Out of shear spite, on the 20th of March 1993, Jordan scored 36 in the first half only. He took so much offense from that small comment, that he humiliated Smith in front of 20,000 people.

Right after that, we see Michael contemplating coming back to basketball, as he leaves the baseball White Sox camp, and Armstrong challenges him to a one on one, saying that he is now old, and not play anymore. This is idea very clearly supported by Scottie Pippen, who on national television, points to the Jumpman logo on his sneaker, and signals him to come back. At this point, Michael has now been training with the Bulls for the third time in a week, stirring a lot of rumors, and even more conspiracy theories. But Jordan doesn’t give anyone an idea as to what his plan for the future is. When he finally tells the teams management that he wants to come back, we see Jordan rejecting multiple press releases written for him, and when he gets told to write his own press release, Michael takes the pen and paper, and writes, “I’m back.”.

That season, the 1994-95 one, was especially painful, as the Bulls lost Horace Grant, as he went back to Orlando, and so when Michael came back, it gave the team a lot of hope. But it hit Jordan hard, playing his first game without his father being around. Michael walked onto that court, wearing number 45, which was his first number when he played in high school. The start was very shaky at first, but once all that rust got shook off, Michael was back. Jordan then played against the Hawks, taking the victory by just one basket. Michael was very nervous going into the 1995 EC semi finals, playing aginst the Orlando Magic, due to lack of time to prepare, and get his body back to peak basketball performance. That game, the Bulls lost, 108-102. This was the end of the Bulls season.

Michael, being Michael, took this as motivation to do better next year. He felt an obligation to the fans, and to the world. His thinking was, that if you were gonna take out three hours of your day to watch him, he had an obligation to be at his best, at all times.

We then see Michael on the set of Space Jam, with Bugs Bunny. They Space Jam crew even made Michael a big professional facility, with a court, a dome, and weights. He even invited the best players out to the Warner Brothers studio to play against him. They would play till 9 or 10 at night, then lift, then wake up at 6 for the shoots. He didn’t like when all these players would come into the gym, joking around, and riding high because they won a championship in 92, or 93, and so he was very hard on them. One day, Steve Kerr was defending Michael, and he was talking all kinds of trash, and Steve was angry because they were getting beat so hard, and Phil sensed Michaels anger, and tried to calm it down. So , Phil starts calling these “ticky-tack” fouls, and this made Jordan angry. He felt that if Phil was protecting Steve, it wouldn’t help them when they were playing New York. Jordan got very ticked off, and he fouled Steve Kerr, and said “Now that’s a f*** foul.” Steve couldn’t hold it any longer. So he goes up and hits Michael in the chest. Jordan hauls off and hits him back, rightin the eye.  Phil then throws Michael off the court. Michael went into his car, got Steve’s number, and apologized. Michael took this a good thing, and his respect for Steve increased by a lot. He was happy that Steve didn’t just stand there and take the heat Michael was giving him, but stood up for him.

The Bulls went into the next game, and won the next 23 games. The Bulls were trying to break the record for the most wins in a season, replacing the Lakers, who, at one point, won 69 games, and lost 13. And they did it. The Bulls won 70 games, cementing their spot as the greatest basketball team, ever.