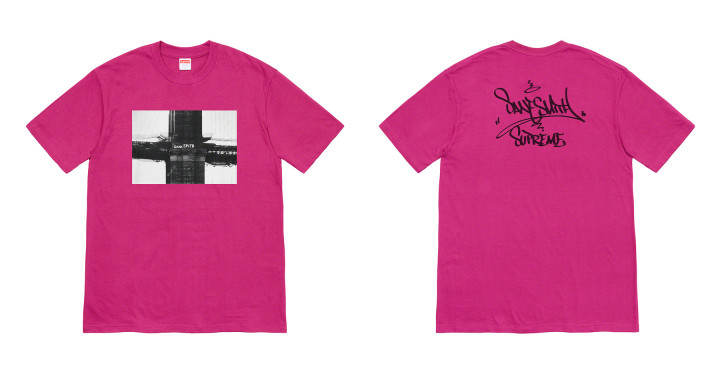 Although it was nearly impossible to checkout of Supreme’s website due to the release of its bandana box logo T-shirts, one of the best products from Supreme’s Fall/Winter 2019 drop was the “Bridge Tee.” The T-shirt features a black and white photo of the Manhattan Tower of the Brooklyn Bridge painted with graffiti that reads “Sane” and “Smith.” This graffiti, which would have required someone to scale the Brooklyn Bridge, was not Photoshopped.

The T-shirt marked an official Supreme collaboration with the New York City graffiti writer Roger Smith, better known as Smith, the only living member of the legendary graffiti duo SaneSmith. In 1988, the two graffiti vandals successfully painted their names on one of the most death-defying spots in New York City. The outer facade of the Manhattan Tower of the Brooklyn Bridge, where the only way to paint the spot was by catwalking along a thin ledge with no guardrails. One missed step could send an ambitious graffiti writer falling down 120 feet into the East River.

“It was basically an easy job compared to cutting your way into a [subway train] yard or trying to talk your way out of catching a beatdown from a territorial [graffiti] crew,” says the 51-year-old artist in an email. “I’d say the ledge was barely a couple of feet wide so it was not a piece of cake walking out there. But as young men do, we steeled our nerves and went for it.”

From the interview with COMPLEX:

So how and when did Supreme reach out to you for this collaboration? What did they ask for?
Supreme reached out to me some months ago through the graffiti grapevine. Graffiti writers are one big dysfunctional family. Nearly every writer can be reached through knowing the right people. Eventually, we entered into a discussion and they made it known to me that they wanted to reproduce a photo of the Brooklyn Bridge painted up on a T-shirt. Since I had a better photo of it, I supplied it to them and lended my handstyle to the Supreme name. I have to thank them for the opportunity to showcase that “installation artwork” on the bridge.

Were you a fan of Supreme before working on this collaboration? Are you into fashion in general?
As for being a fashion fiend/trendsetter, no way. Although I have heard of the Supreme label for some time now, I didn’t even know they had a store until this project. I didn’t even know about their collaboration with JA. Everyone who knows me knows that I have little to no fashion sense.

Any [clothing] collaboration done would more than likely show my non-artistic side. Sure, I have done plenty of major murals over the past couple of decades—and I can paint pretty pictures when needed—but that is not what the SaneSmith brand of graffiti is known for.

Have you ever been approached to put your work on clothing before?
Yes, over the years one or two people have pitched ideas for me to do a T-shirt. But there wasn’t much money involved or they also needed me to hustle the finished product around to stores, which seemed like a minimal payout to me. I wouldn’t mind doing some other shirts eventually.

How did you pull off painting the Brooklyn Bridge in 1988?
The Brooklyn Bridge caper was just us being SaneSmith at our height of skill. Sane happened to scope out the spot and let me know what it entailed. It was basically an easy job compared to cutting your way into a [subway train] yard or trying to talk your way out of catching a beat down from a territorial [graffiti] crew. I’d say the ledge was barely a couple of feet wide so it was not a piece of cake walking out there. But as young men do, we steeled our nerves and went for it.

The next day, photos were taken and it was onto the next project. I think the authorities reaction was overblown and more the result of it being the last straw for someone in the city’s bureaucracy. So they tried to simply bill us, then sue us, when we didn’t pay up.

If you actually look closely in the photos of the Brooklyn Bridge, you can notice other tags and a small piece was painted there before the SaneSmiths were put up. No criminal charges were filed as there was no proof regarding how it was done. So they tried to put us through the ringer in a civil suit. When that all fizzled, we figured we would let the authorities know that they were not calling the shots and so we painted the bridge again. What else would angry disenfranchised young men do in such a situation?

How did you start writing graffiti and who inspired you when you first started?
Although I had dabbled in writing graffiti since probably 1979, back when I was writing my friend’s name around my school, I grew more interested in it when I learned how to read some tags in the subways. I picked up a spray can in 1984 and made sure people knew the SaneSmith name. In the early 1980s I would go to school up by Baychester Ave in the Bronx. Along the way to school, I would catch the latest feats of artistic expression by Blade, Lee, and the mind numbing output of Cap, by the hundreds. There were plenty of others to see like IZ the Wiz, NE/Min, Dondi, Chris217, Ban2, Mitch77, Sharp, etc.

How would you describe the creative camaraderie between you and your brother?
As part of the SaneSmith team, I had more time after dark to go out and explore New York City whereas Sane would spend more time honing his skills. It wasn’t that he didn’t want to go out and tag up the neighborhood. He just chose to perfect his skills so that when he went out to paint he would do a better job at it.

It’s crazy to see the American Flag Sane piece is still standing inside the rubble of the old ABC No Rio, an art center in the Lower East Side. I believe this October marked the 30th anniversary of an exhibit you two held there titled the Selected Works of a So-Called Graffiti Vandal. Is there anything you want to say about that show?
The ABC No Rio show was both an interesting point in Sane’s career as well as a depressing one because very few friends of his actually came to it. We had very little support from our elders since the graffiti culture was being erased from the subways in the late 1980s. But Sane saw that having a show was apart of being a writer who had vision and talent beyond simply bombing. He was given the opportunity to paint in the gallery, so he made some canvases and did an installation. We came up with the supplies, distributed a few flyers, sat in the gallery to keep it open, and maybe 20 people came through. The best thing that came about that show was meeting the curators for the space and other people who were not writers but showed an interest in the writing culture. For them to honor Sane’s memory and do their best to keep the Sane flag piece alive is amazing and I thank them for it.

It’s honestly beautiful to see older works by yourself or Sane still running in New York City today. One of my favorite Sanesmith pieces is inside the Sunnyside train yard with Zephyr, and Lady Pink (Sandra Fabara). I visited the newly reopened MoMa last month and saw that a canvas Pink made with Jenny Holzer is currently displayed on the second floor. How did you meet Lady Pink and how has she influenced your work as an artist?
Meeting Lady Pink and being married [to her] now for over 25 years is quite a dramatic change from being a listless writer and quality of life offender. It was not simply that going legit meant “living the life” and “going to Paris.” The amount of different opportunities to paint certainly expanded. It’s a different battle when painting a mural in the street. Few writers understood or appreciated our difficulties in bringing aerosol art into that light. By the mid 1990s, we, along with TAT Cru in the Bronx, were some of the few groups to organize and paint at our own expense; bringing street art, urban art, aerosol art, graffiti art, whatever you wanna call it, to the streets of NYC.

I find how the NYPD treated you and Lady Pink absolutely appalling. Is there anything you want to get out there about how the NYPD handles graffiti crimes?
The NYPD simply saw our creations as some sort of threat to their authority and clamped down on our activities. After two police raids on our house—and nothing but a $90 fine to show for both of them—we followed what other artists have done and fled the city. Not surprisingly, other cities and countries have invited us, and dozens of other ex-graffiti writers, to come and paint their walls. The NYPD has always used graffiti and other ‘quality of life’ crimes to justify their gestapo like tactics and extract money from the poorer segments of the population. Writing on the wall is just paint or ink on a surface. Clean it up if you don’t like it, but jailing people for it is the real crime.