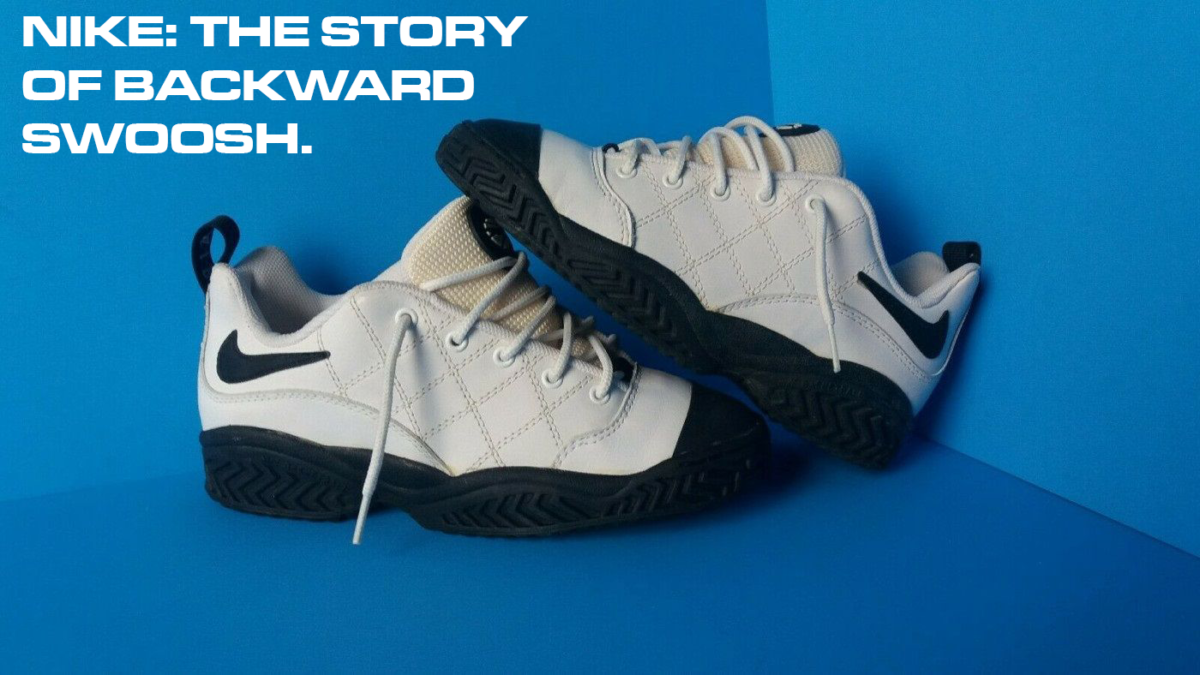 THE STORY OF BACKWARD SWOOSH

The Nike swoosh logo is one of the most recognized logo not just in the sportswear sector, but maybe in the whole world. The history of the swoosh logo dates back to the time when a Portland state student-designed and sold the logo to Phil Dog for a mere amount of $35. Since then the swoosh logo has been incorporated in the design of sneakers in a variety of ways like the mini swoosh, fat belly swoosh, multiple swoosh, and of course the infamous backward or reverse swoosh.

Traditionally Nike used the swoosh logo in a manner that the end of the swoosh would always be pointing towards the heel end of the sneaker. The backward swoosh denied this stereotype and thus is considered as one of the most iconic variations in the Nike swoosh logo history.
If you think Travis Scott “AJ 1” was the first sneaker to do so, it’s time to upgrade your sneaker I.Q right away. So, here is an insight into the history of the greatest backward swoosh logo sneakers of all time to rev up your sneaker knowledge.

This 1994 released basketball shoe was and is still in fact quite underrated sneaker in Nike’s catalog. This pair was even retroed which had a major update by changing the soles to 360 air soles. Although the design of this shoe was completely utilitarian, the shoe went unnoticed for long. This shoe was designed for Dennis Rodman, the NBA Hall of Famer. The shoe looks more like a boot and was worn by Dennis throughout the 1994 season when he was with the spurs. In spite of the fact that it was designed for him, it was not a signature shoe. Air Darwin was Nike’s 3rd outdoor basketball sneaker after it dropped the AIR RAID series in ’92. This was the first time that Nike used the backward swoosh instead of its traditional one.

Again in 1994, Nike made a reverse swoosh sneaker not for a basketball player, but for the eight-time grand slam champion Andre Kirk Agassi. This Armenian sportsman was well remembered for his neon sneakers from earlier 90’s apart from his achievement in tennis. Agassi won his first-ever US open and his second grand slam wearing the Nike Air Flare.

These shoes were a departure from his previous eye catchy yellow neon or hot lava colored ones. The Nike air flare was one of the most important sneakers he wore and was all business in these. The sneaker came in a classic black/white colorway and sported a tiny reverse swoosh logo in the side panel of the upper which gave the sneaker an overall subtle look.

This pair has no such significant history. Released in 1995, this pair might have been inspired by the DARWIN in terms of the usage of the swoosh logo. Like the DARWIN this was also a low-top outdoor basketball shoe. The swoosh on this shoe was used on the upper near the heel in a backward fashion. The black and white colorway was used in the making and used a pattern of seamed rectangles on the upper. Although this shoe looks cool, it’s one of the forgotten piece in Nike’s history.

The category for which this piece was created doesn’t exist anymore. This outdoor specific basketball shoe was dropped in the year 1995 and was made specifically for concrete outdoor court considering the thickness of its sole. This tough-looking shoe came in a black/tan colorway with almost treaded outsole and toe cap for extra protection. A greyish white color swoosh was present in the backward fashion in the heel part of the upper.

The Nike LeBron 10 is not considered as one of the best in the LeBron series but certainly, it had its moments. Back in 2012, this shoe retailed for a crazy $290 price tag. Even though the price tag varied with the colorways, the most expensive one was the ‘Sports Pack’ edition which had a Nike+ unit embedded in the sole for performance tracking and ‘cork pair’ which represented James winning the 2012 season with the heat. This time the sneaker has a reverse swoosh which was quiet bigger in size compared to the earlier models in the list

This sequel from the AIR MAX line was the first one to have the longest-running air sole which was way better than the previously bulky Air max pairs in the context of performance. This tech was used till 2017 after it was replaced by vapor max which is considered as the best ever tech in running shoes. This model had no significant cultural impact but was the first air max model to feature a reverse swoosh.

The Nike Paul George 2 was released in 2018 and is among the handful of Nike signature basketball shoe at the moment. He had other signature sneakers before and after the release of this version but this is regarded as the best amongst them. The collaboration of this model with the PlayStation gave rise to the best colorway with a backward swoosh on the midsole

This sneaker was released as a part of the continued legacy of the now-deceased NBA legend Kobe Bryant. Built on the original Kobe series silhouette this low top basketball sneaker sported some never seen before features like the shroud on the upper and a reverse Swoosh on the midsole. Released in 2017, this sneaker was specifically designed with the guidance from Kobe Bryant for the performance of the new-gen players

The Greek freak aka Giannis Antetukumpo got a chance to start his own signature shoe line with Nike in 2019. This low top basketball shoe has taken its color inspiration from the story of his journey that started on the streets of Greece until he made it to the NBA. The mesh upper has subtle detailing but has no Nike branding. There is a big reverse swoosh made up of shiny material in the midsole of the sneaker. The reason why this sneaker stands out from the rest is because of the story behind it and of course the way it looks!

This collaboration of Jordan along with the great rapper TRAVIS SCOTT has changed the way we look at sneakers. This piece can be considered as one of the most impactful shoes ever in the history of sneakers, especially amongst the younger generation.

The iconic silhouette was previously worked on by designers like Virgil Abloh, the creative director of “off white” who included elements like used tabs. In the same way, to give the sneaker a twist, Travis Scott came up with the idea of reversing the swoosh which just pushed it to the next level! This sneaker made sneaker apps crash. Might be he wasn’t the first person to introduce this backward swoosh trend but he made it an integral part of the pop culture thus making this tied to his name forever!

Honorable mention for the “mistake” that made the shoe one of the most popular in the world, since it is a single specimen: it is the Air Jordan 1 SB where the Swoosh was sewn backward. But the “opposite” this time doesn’t mean that the logo direction is opposite to the shoe direction, but the Swoosh is placed upward.

For more such articles

The Adidas D Rose 1.5 is resurrected in the “Vivid Red/Black” colorway.