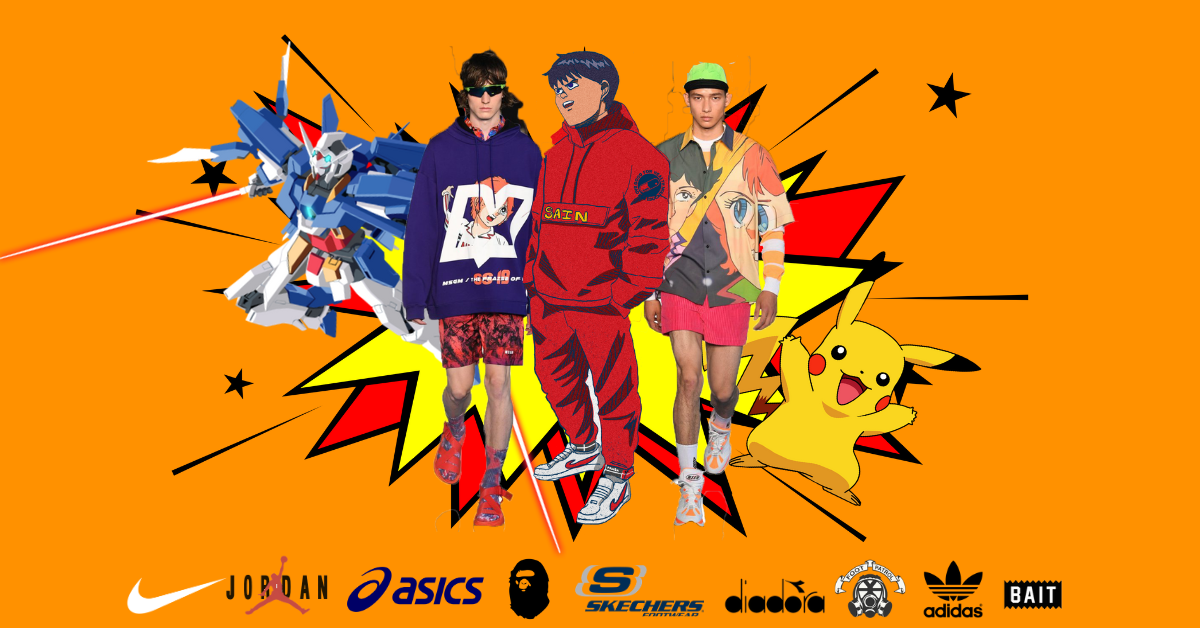 Anime and Manga have been working together in streetwear circles for a while now, The two worlds share similar principles, fulfill a deep desire for nostalgia, and promote amazing graphics.

So it’s a surprise that the streetwear culture has taken so long to catch up. However, with the flood of weeb releases reaching the market in recent years, it seems like streetwear labels are finally making up for the lost time. Suddenly it’s “cool” to be an otaku!

It’s pretty difficult to pass on one of the greatest anime characters of all time while choosing collaborations! Bait and Diadora have partnered up with Astro Boy to produce a trendy line of clothing to celebrate him.

BAIT was never afraid to reveal its cartoon ties and gave us more pop culture drops over the years than any other brand. Their tribute to the legendary Astro Boy of Osamu Tezuka is undoubtedly one of their best collaborations since its launch in 2017.

The eventual fusion of streetwear and anime started with graffiti and skateboarding, where the proliferation of bold letters and urban characters helped brands like Jeremy Klein’s anime-themed Hook-Ups rapidly take over the skate scene in the years 99 and 2000. And It was a Big Hit!

It was one of the first collections to feature anime designs back in 2013, with Hook-Ups’ first-ever partnership coming full circle, courtesy of The Hundreds. The Hundreds X Hook-Ups collab featured an exclusive anime design of LA Dream Girl and Adam Bomb-San.

Between the tees, skate decks, and hoodie, the Hundreds’ iconic Adam Bomb logo that received an anime-style makeover was one of the most popular items.

MSGM SS/19 Menswear between sportswear and streetwear with excentric colors inspired by a range of randomness, including rainbow graphics from retro vitamin packaging. The series was also influenced by the 80’s athletic anime Attacker You! with characters from the series featuring on four bits. You’re an intruder!

Not as well in Japan, it was the first anime to gain popularity in Europe, with a growing following in France, Spain, Portugal, Poland, and Italy. With Japanese animation shaping the European fashion scene, we’ve seen one of the best cut-and-sew anime collabs ever seen. Both fans and fans of the anime will appreciate the elegance of these garments.

With three anime total collabs with One Piece, Dragon Ball, Pokemon, it would be unfair to not keep BAPE from this list. As far as streetwear and anime collabs go, BAPE tends to feature heavily.

This collab – between BAPE and Pokemon – fell in August of this year. Never underestimate the brand of Pokemon, which is huge not only in Japan, but also worldwide.

Bape has collaborated with all 3 canon parts of anime including Z, Super, and Oldest Dragon Ball Series. It started with In mark the 30th anniversary of the anime legend Dragon Ball a capsule set was released including T-shirts, crew neck sweatshirts, and goods such as cushions, tote bags, mug cups, and hoodies.

After that BAPE continued to collab with Dragon Ball franchise, The latest one was last year’s collaboration on the animated hit movie “Dragon Ball Super: Broly” focusing on Goku and Vegeta, Other characters that appear include famous characters such as Golden Frieza and Broly. All three releases were dope for a Dragon Ball fanatic.

The first collab, and one of the earliest anime collabs ever, was released in 2012 with two deliveries. Although the first delivery received criticism of the lack of BAPE branding, the second delivery was all streetwear and something an otaku would have asked for, including Zoro in the BAPE.

BAPE and One Piece teamed up again in 2017 with a BAPE-based Straw Hats crew, but it was a BAPE KIDS exclusive. The next year, AAPE revealed that they would join The Straw Hats Wonderland. The collab featured half of the Straw Hats Flag, half of the AAPE Zip-Up Hoodie.

From the option of t-shirt color to the screen printed graphics, this collab is extremely cool to look at. It’s as if the Pretty Guardian had a streetwear section of its own. Yet this collab is unique as it takes into account the needs of t-shirt connoisseurs. Yeah, the option of blank, from color to sleeve length, is great, but there is also a mix of small chest pocket graphics and large graphics that dominate the front and back.

50th anniversary of the partnership between Shonen Jump and Uniqlo! This mixup saw a slew of exclusive Jump inspired tops, each a stylish and colorful tribute to the past and present Jump show. Where many collaborations concentrate on a single, common brand, the Uniqlo Jump collaboration spanned the 50 years of Jump’s library, featuring shirts for obvious modern classics such as Naruto, One Piece, Yu-Gi-Oh! , and Hunter x Hunter, historical titles like Kochi Kame, Hell Instructor Nube, and Rookies, and even obscure, lesser-known regional titles like Pyuu to Fuku! It’s Jaguar.

Such shirts sought to cover the entire library of Jump books, but they also made sure they did so in various fashions.

Look hard enough and you will find a manga or anime that you can dream of in every sport. The basketball theme, the Slam Dunk show, which had its debut in 1990, was one of the first of it’s kind and perhaps the greatest.

The collection features a variety of apparel and exclusive silhouettes on the Air Jordan VI and Jordan Super. Fly. The pack has motifs illustrating the tale of Sakuragi, which has not evolved since ’96.

It was the most hyped collaboration so far. Akira, a Japanese manga that takes place in a post-apocalyptic setting, is an iconic series with a cyberpunk feel.

2018 was certainly quite a year for Dragon Ball, with the end of Dragon Ball Super capturing global attention, the release of Dragon Ball Fighter Z, the Dragon Ball Z x Primitive collab, the launch of the new Broly movie, and the official Adidas partnership! Adidas collaborated with Dragon Ball Z, going from saga to saga to create exclusive shoes reminiscent of several of the famous characters and fights in the show.

There are a total of eight sneakers in this series, two sneakers were released every month, one inspired by a protagonist and the other by an antagonist.
One of the best aspects of this collection was with each sneaker released from the series, there was an action figure of the corresponding character. The first set consisted of for Goku and Frieza, with Vegeta, Gohan, Cell, Majin Buu, and Shenron on the way later this year.