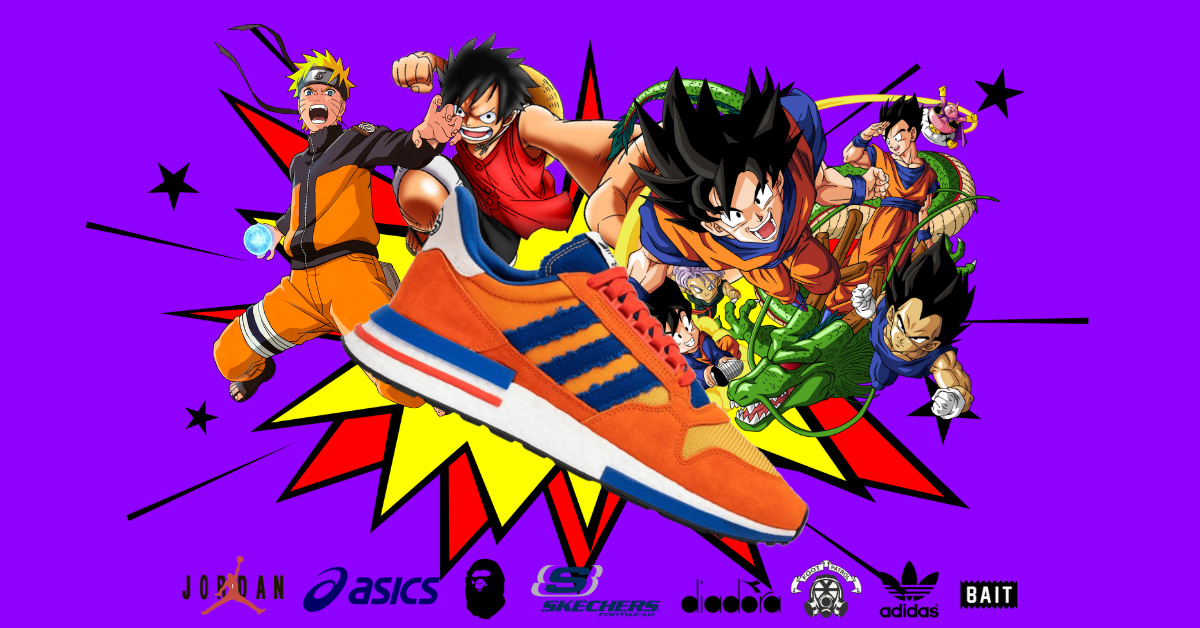 Anime Inspired Sneakers | The Best of them all

Supreme to The Hundreds have been publishing anime-inspired collections for some time now, and the sneaker industry seems to have taken the lead.

We have seen plenty of colorways on the surface from Pokémon to Neon Genesis Evangelion, DBZ to Doraemon. Nonetheless, not all shoes are made equal, as you already know. These are the best sneakers of any sort.

The COPA UltraBOOST ‘Kakashi’ features color patterns associated with the character that became the Hokage of the Leaf Village, such as the blue suede drawn from the sleeves of the Jōnin uniform. Additional details of the “Kakashi” COPA UltraBOOST include a Leaf Village front protector lace tab, an Anbu crest at the rear, referring to the time when Kakashi was still a member of the village’s covert black ops unit, and a Mangekyo Sharingan motifs on the tongue.

To round off the design, a printed “Hatake Kakashi” was added in Hiragana on the shoe’s heel and a blue Continental rubber outsole.

Starting its mechanical life as an anime before exploding into a robotic empire, passing through just about every creative medium, from manga to movies to video games, and winning a legion of fans, space opera Gundam is now getting its own Reebok Insta Pump Fury.

It’s a fitting silhouette for the series, the Fury is definitely Reebok’s most space-aged model, even though it’s 25 years old, and here we see two new colorways that are inspired by some of your fav bots.

Say what you want, but these sneakers stand out named as titled D’lites 2 and D’lites 3 were released back in January 2018. The Sketchers X One Piece collab has a total of seven shoes modeled after One Piece’s Marineford Arc, including the Luffy, Boa Hancock, Jimbei, Law, and others. It is one of those shoes that bring the outfit together (no pun designed). The timeless style and color schemes allow the shoes to go with everything. They are priced as Sketchers, not to mention!

Fila Korea had partnered up with Pokemon to bring a limited edition collective to Korea in April 2018.

The sneaker range was available in five colorways, each inspired by the famous Pokemon characters, including Pikachu, Bulbasaur, and Charmander, to name a few. The construction of the Fila x Pokemon was kept clean, except for the heel and the inside of the feet.

One of the most identifiable Air Max colorways ever, the return of the Air Max 98 ‘Gundam’ led the silhouette’s 20th anniversary celebrations in 2018.

Although it was not an official Gundam collaboration, the inspiration of the mecha-robot is undeniable. Decorated in a beautiful red, white and blue combination, the sneaker’s palette has a striking resemblance to the popular Gundam Mobile Set.

Inspired by the classic suit of the Mighty Atom the silhouette mix of white, black, and red on its luxury leather and woolen silk suede top.

Astro Boy can of course be found on the heels and transparent outsole himself.

This official partnership, the second inspired by Gundam on our list, is subtler in terms of their mecha motives than the entry for Team Swoosh.

During the ’90s, the show sparked an enormous Basketball Boom in Asia, with uncontrollable amounts of Jordan hype across the continent. Recognizing the power of Slam Dunk, Jordan Brand agreed in 2014 to introduce a Jordan Super.Fly 3 and an Air Jordan 6 with Super Fly having 4M illustrations and Air Jordan having 3M illustrations.

Like a spirit bomb, Team Trefoil took their time to pump up the Dragon Ball Z x Adidas range. After months of anticipation, Adidas formally announced the release only a month before the first drop, with the ZX 500 RM ‘Son Goku’ kicking off in Super Saiyan style. Dropped in small numbers, the sneaker sold out quicker than you could say ‘Kamehameha! ’.