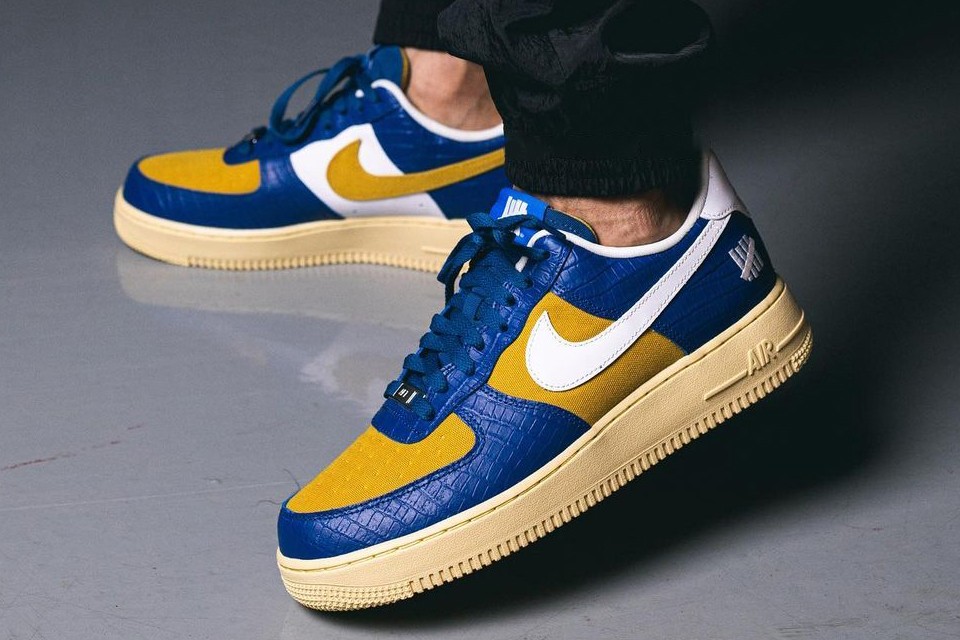 UNDEFEATED and Nike are joining forces for an eventful collaborative summer with their  “Dunk vs. AF1” pack, presents that flip the colors of the James Bond and Eddie Cruz-helmed brand’s past Air Force 1 and Dunk collaborations onto the other silhouette. Now, a new piece of the collection has been uncovered: a croc skin-outfitted Air Force 1 Low.

This opulent Air Force 1 blends royal blue croc leather and shorthair mustard yellow suede on its upper- the former material is used on the mudguard, eyestays and heel, with the latter gracing the toebox. There’s a yin and yang of kinds on each shoe’s midfoot as well: the lateral midfoot flaunts a white leather Swoosh and yellow suede quarter panel, while the medial midfoot picks for yellow suede Swooshes and white quarter panels.

The look is revived together by white heel tabs with blue Nike Sportswear branding and blue revealed foam tongues adorned with UNDEFEATED’s signature Five Strike hit in white. Another white Five Strike graphic is adorned on the lateral heel, and yellow insoles offers a “Dunk vs. AF1” graphic. Rounding off the design are purposely yellowed midsoles.

UNDEFEATED x Nike Air Force 1 Low “Dunk vs. AF1” is yet to receive an official release date and pricing information, but its expected to arrive with the rest of the pack later this summer.