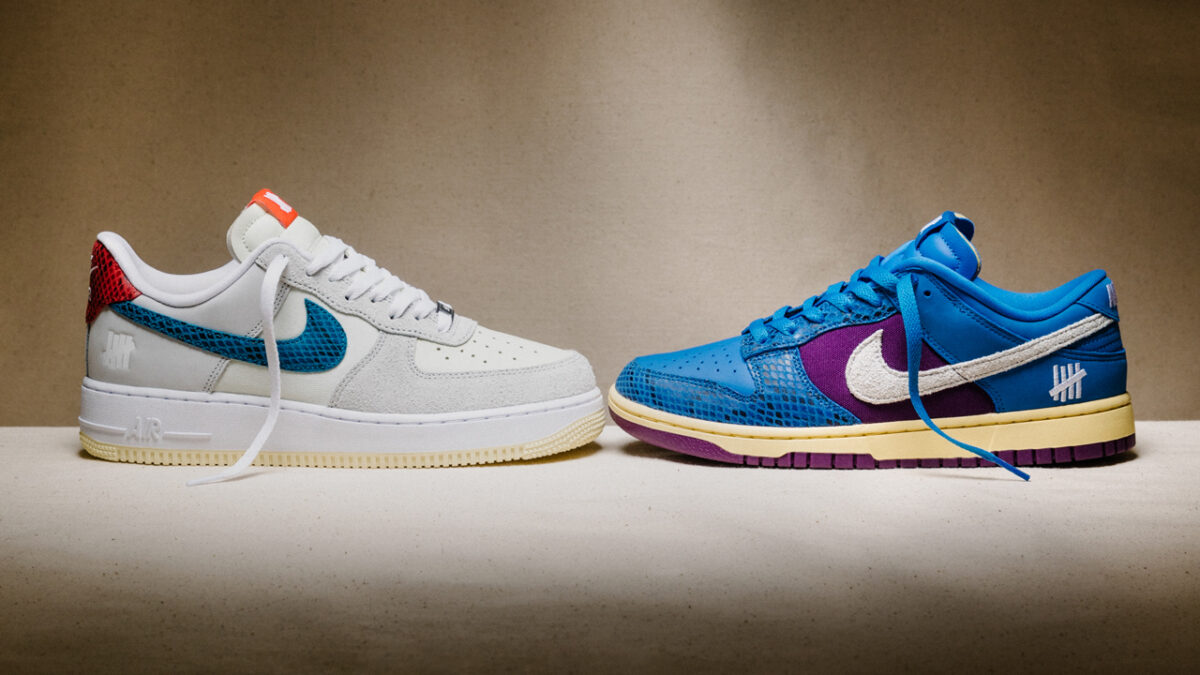 UNDEFEATED and Nike are back with another piece of their “Dunk vs AF-1” offerings: a Dunk Low and an Air Force 1 Low named “5 On It.” Whereas the first release from the “Dunk vs AF-1” collection was focused on flipping the existing color schemes between the Dunk and the Air Force 1, the “5 On It” offers a contrasting inspiration — namely, material references from the late ’90s and early ’00s, a period seen by many sneakerheads as the “golden era” of Nike Sportswear.

The collection’s “5 On It” name is quite literal, as it refers to the number of materials used on each shoe. UNDEFEATED’s designers were assigned to use four material references from the late ’90s and early ’00s and also asked to add a random “exotic material” to finish the whole look. In the case of the Dunk Low, this assignment resulted in a purple and blue body with a white Swoosh, white Five Strike hit, yellowed midsole, and purple outsole. The materials that have been used include full-grain leather, canvas, nubuck, hairy suede, and signature snakeskin, which graces the mudguard and eyestays. On the other hand, the challenge for the Air Force 1 Low was interpreted with a white and gray upper, bolstered by vivid pops of red and blue hue that donned on a white midsole and a cream outsole. Leather, suede, nubuck, and canvas are all present and accounted for, with snakeskin again being used as the previously mentioned “exotic material” on the red Swoosh and blue heel tab.

Look for the UNDEFEATED x Nike Air Force 1 Low and Dunk Low “5 On It” to release via the UNDEFEATED webstore on August 6. Retail prices have yet to be announced.

END. clothing collaborates with Beams Plus to celebrate their 15th anniversary