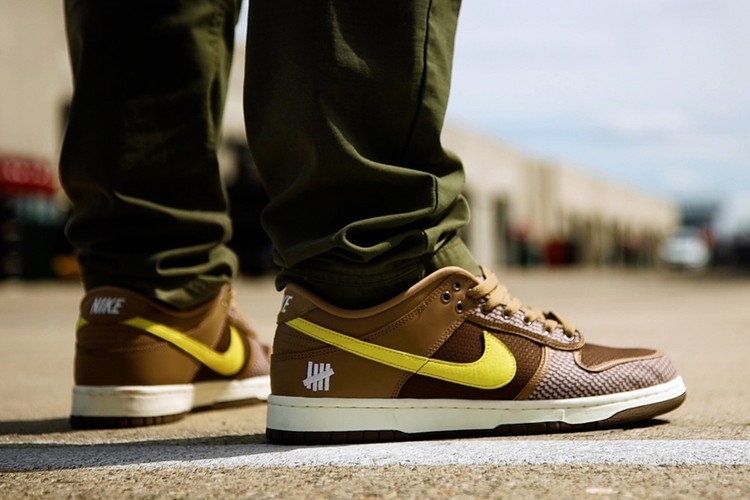 UNDEFEATED‘s familiar Five Strike logo will be seen on the Indianapolis Motor Speedway this year, as the brand worked with McLaren for a custom wrap on the ASMP #7 car — and, in honor of its debut into motorsports, the LA-based boutique has re-joined forces with Nike for a new Dunk Low. UNDEFEATED’s latest go-around with the Dunk features similar detailing to its Air Force 1 low “Canteen” from 2006 and was spotted on the feet of co-founder James Bond. Reportedly (sneaker news), this is part of a larger Nike Sportswear initiative- one that swaps familiar Air Force 1 and Dunk colorways to the opposing model for a sprint of “alternate history.”

This Dunk silhouette flaunts a brown and white hounds tooth-patterned mudguard and eye stays along with plain brown textile quarters and toe boxes, each rimmed by thick brown leather piping clearly funneling Bond’s eye for military-inspired designs. Additionally, brown leather is used on the heel and collar with a yellow Swoosh adding in a dash of vibrancy and a white Five Strike logo on the lateral heel bringing more branded verve into play. Finishing up the look are Nike spell outs on the heel tab, brown laces, white midsoles, and brown outsoles.

The release is expected sometime this June.