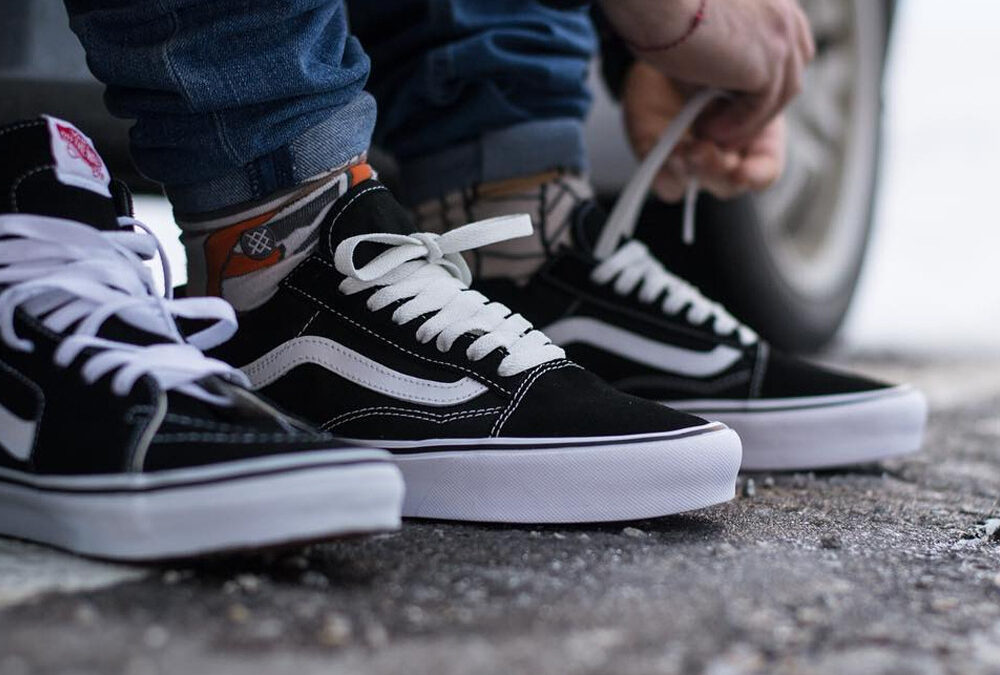 Vans Old Skool : The Most Celebrated Sneaker Of All Time

There is something about the Old Skool, the classic Vans skate shoe with a low-top lace-up built with a durable suede and canvas body, that places it on the very high pedestal of the sneaker league. It might have something to do with being the first design to have the side stripe that has evolved as a distinctive identifier for the brand now or the versatility or the fact that it has been spotted everywhere from the top of skateboards to the shelves of artists rocking the billboards.

Introduced by Vans in the year 1977 the Old Skool were known as the  “Style 36” . An outcome of a random doodle, the hallmark side-stripe was originally referred to as the “jazz stripe” by its creator Paul Van Doren,  co-founder of Vans.

Following its release, in the 1980s, the panels that the shoe offers became a blank canvas for people to customize their pair according to their disposition by adding scribbles and doodles on it.

What added to its stature was the fact that it was easily accessible and available at a price that didn’t burn a hole in the pockets of the mass. Who doesn’t want to rock a pair of shoes similar to Julia Roberts ? They were widely accepted by the masses and donned by skaters, pop stars, rappers and most influential celebrities  celebrities like Frank Ocean, Tyler the Creator, Julia Roberts ,Brooklyn Beckham, Chloe Grace Moretz , Miguel, Olivia Wilde, Veronika Heilbrunner and of course, countless models like Stella Maxwell, Kristen Stewart, Kylie Jenner and Hailey Baldwin.

The Vans  Old Skool come in an array of colors yet are known to be pristine, subtle and simple. This makes it really easy to style with one’s outfit, which in turn makes it a go-to pair of sneakers for every one. The other factor that makes it a wardrobe staple is that these are a pair of unisex shoes that amp your whole appearance owing to its position in the industry as a pure classic.

The legendary status of the shoes can also be attributed to the way Vans always puts them out in the open, ready for collaborations. High-end brands from the fashion industry specifically streetwear  and media franchises like WTAPS, Supreme, Opening Ceremony, Stussy, Toy Story, Tyler the Creator and Peanuts have come up with some kicky versions of the sneaker which the hoarders were not able to resist. Even the streetwear mastermind Virgil Abloh approves of it.

The Vans Old Skool have come a long long way, from skateboards to the mainstream sneaker market to high fashion runways. No outfit can go wrong when a pair is thrown in to complete a look. Well, the Vans  Old Skool are casual, cool and a classic timeless piece, they are irreplaceable. They are what they are, ‘the’ Vans  Old Skool.

Well thats just how VANS became the most celebrated and in ways the most important sneaker of every wardrobe, and yes now you can have one for yourself too.

Cop one for yourself from vans stores as well as from Veg non veg and Superkicks india.

And yes not to forget